This is the right place to discuss on how to implement hardware vsync, adding a VIA or AY chipset, puting multiple roms, or how to design a new flash expansion card.
Post Reply
6 posts • Page 1 of 1

Hello guys,
I'm glad to show one of my new controllers - on the picture attached. It adds Apple ][ disk interface to work with 5.25" disk drives. With other new project - http://www.bootzero.com it can rule modern 3.5 HD drives and use DS/HD floppies. I'll add I/O capabilities very soon - to connect PC <=> Oric to transfer disk images (Now I'm doing it via printer port). Because it's CPLD-based it's easy to expand, no I'm waiting some ideas. I'll thing to add RS-232 interface and 512K RAM-disk too. I'll be glad for some new ideas 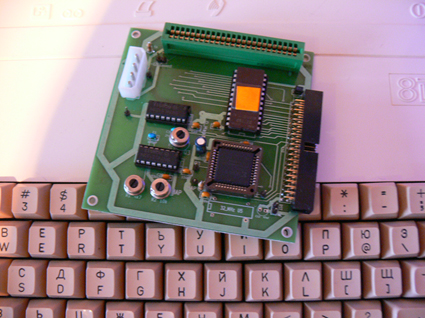 What am I seeing here?

Is that a (future) replacement for the microdisk drive? Can't believe my eyes...

Could you give us some details, please?
Top

Thanks Chema,
The controller is not Microdisc compatible, but it's Dos 8D compatible. Dos 8D is fully compatible with all Oric programs and games, even more - it don't use #400-#4FF space, so it-s free for programs. I wanted to create cheap controller that is easy to expand with new features. I'll buy bigger CPLD-s to add memory management for using 512K RAM chips I have. The software for PC <=> connection is ready, so it must only modified to work with new addresses. The main feature of new disc controller is that is alive and I can create more plates if it project is interested to Oric fans. I hope they will like my job

Hardware wise, how does the Oric talk with this controller? How does it compare with the Microdisc or the Jasmin? Does it require a special boot sequence, does it have it's own eprom and support the overlay switch, how does reading/writing sectors work? How is a typical bootable floppy? Do you think it would be possible to create a floppy that boots both on this device and on a microdisc (different bootsectors at different locations?)
Top

Technically the controller adds Apple ][ Disk interface to Pravetz 8D (Oric). So you can use only Apple ][ 5.25" disk drives or with bootzero plate you can use HD drives, but the format is completely different from PC drives. The Eprom of the controller is the chip with orange label on the picture. There's little bufer board connected to Oric expansion port that is not shown on the picture, and it's connected to controller via 80 pin hard-disc cable. When you switch on the controller the computer resets and then you must type CALL #320 to boot the dos loading. There's two versions of dos you can load - one work on RAM #6600 - #8FFF - this is "low" dos. It's not usable for long games as you may expect. But there are some system programs that work only with this kind of dos - Disk editor, Text editor, Music editor and my PC <=> Oric Disk transfer program. The Dos 8D 2x family work at overlay RAM, so you can use it for a long games and programs. The format of the disk is very different. The Dos 8D disks are Apple ][ compatible, so the files can be read at Apple ][ (But not executed ofcource). In the future can be made a controller that will work with tho kind of drives - Sedoric and Apple ][, but it's question of architecture changing.
Top

Finally I get off the last two chips. I have replaced the monovibrators, so there is no need to rule the variators to set up the MAP and Q3 signals. I will prepare new PCB-s soon and will make video to see the controller working...
Top
Post Reply
6 posts • Page 1 of 1