If you want to ask questions about how the machine works, peculiar details, the differences between models, here it is !
How to program the oric hardware (VIA, FDC, ...) is also welcome.
Post Reply
15 posts • Page 1 of 1

I'm trying to diagnose some issues with my Cumana Reborn.

The first one is that it requires at least one minute warming up time for both the Cumana Reborn and my Atmos before the disks are detected, else it stays forever on "Insert System Disk".

That's not a super critical issue, but maybe that can hints at other issues, am I the only one with that problem or does it work instantly for anyone else?

The real issues are these:

1) It seems that some HFE gets corrupted, I got my Sedoric 3 disk fail with a "Track: 14 Sector: 02 Read Fault 10? DISK I/O ERROR" and when I checked the HFE content with another HFE I just converted from a working SEDORIC3.DSK I found out that an entire sector was full of UUUUUU... which was not expected. I then checked my other HFE files on the Cumana Reborn USB stick and found out that my copies of ASM2K2 and BARBITORIC were also both corrupted with similar UUUU at the start of the disk

2) After reconverting all the non working floppies, I got most of them to work (Arcade Music demo, ASM2K2, Barbitoric, Oric Giga Demo, Pulsoids, 8Bit Slicks, Space 1999, Zip'n Zap) but neither Oric Tech, Pushing The Enveloppe or Zero Fx ran: They booted and then stopped with a black screen.

The common element of these three is that they are all Floppy Builder based, so I tried Blake's 7 and that one ran just fine.

I did a few more tries, and I managed to get Oric Tech to boot once out of a dozen attempts, generally it's just stuck on T:00.0.

I guess that could be timings related, either on the Oric or Cumana itself, possibly firmware version (mine says it has v3.15 of FlashFloppy), but I tried with the Nova 64 and it behaved the same way).

Could any of you with a Cumana Reborn try Oric Tech, Pushing The Enveloppe and Zerofx to see if they run?

And while I'm at it, here are the corrupted files I was mentioning earlier

Well, on holiday in France so far away from my CR, so can not test now.
Will do so asap when back home if then still needed.

Can not remember those demos not working, but tried a long time ago, so not sure anymore to make a statement they work here without trying.

Only issue might be that I run HxE firmware now, so cannot confirm anything on FlashFloppy firmware without migrating back (which Is a hassle so I rather not do that). When I originally tried your demos though I was still on FF, and can not remember stuff not working.
https://www.idreamtin8bits.com/ https://youtube.com/channel/UCRp7EmVUmeX3rDeTBehb4Vw https://www.instagram.com/idreamtin8bits/
Top

Hmm, start to doubt, seeing the YouTube’s of those three videos I do not recognise any screen, so it might be that those three indeed did not work and I just did not took much bother as anything else was working…..

Blake's 7 has basically the latest changes from everybody who digged in the code, including Chema's change to get the saving code to work, and compatibility added for the Telestrat with the weird alignment macros, etc...

All that can mean that the Blake's 7 loading code may be different by a few clock cycles here and there, enough to make it work while my original demos do not (that being said they do run on emulator, Cumulus, on my Microdisc and with the HxC floppy emulator as well on the same machine).
Top

Dbug wrote: ↑Wed Jul 27, 2022 10:33 am Could any of you with a Cumana Reborn try Oric Tech, Pushing The Enveloppe and Zerofx to see if they run?
Oric Tech.hfe
Pushing The Env.hfe
Zerofx.hfe

I asked about the sound glitching on disk loads in Pushing The Envelope in 2020, so I had no problems running that even then.

I tested your copies of the three files in my Cumana Reborn just now and all run fine, both on the first try and on subsequent reboots.
Top

I don't think my code and weird alignment macros (lol) affect in anything, really. I think I ran your demos using my clone microdisk with real floppies and cumulus.

I, however, seem to recall that some people had trouble with the Cumana Reborn and sent it for repair. Something related to not being able to boot some (or most) images.

If that can helps diagnosing the issue, I made a video demonstrating my specific problem (it was also sent to Piotr and he is checking on his side).

Don't know if it will help, but you never know...

Those last days, I was tampering with my Cumana Reborn (changed the "reset" button to a real reset button and swapped the LM7905 to a TSN 1-2450A in addition to my previous mods) and when I tested it to see if everything works, I realized that it was not loading my games as it did, or it was loading them and then freezing or having a weird behaviour.

I then checked its PCB and discovered that one of the crystals (the one closer to the USB) was not soldered on one side. After having it soldered, the Cumana Reborn started to work flawlessly, but some games were corrupted and didn't want to launch.

Once the games replaced on the USB pen drive, everything went back to normal.

So it might be worth checking the Cumana Reborn PCB.
HigashiJun
Top

HigashiJun wrote: ↑Mon Oct 10, 2022 10:11 am I then checked its PCB and discovered that one of the crystals (the one closer to the USB) was not soldered on one side. After having it soldered, the Cumana Reborn started to work flawlessly 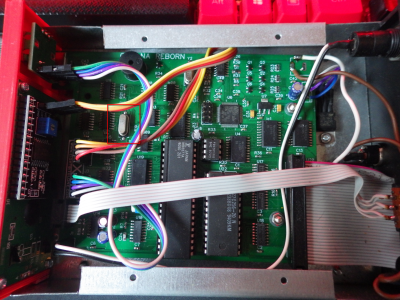 HigashiJun wrote: ↑Mon Oct 10, 2022 10:11 am I then checked its PCB and discovered that one of the crystals (the one closer to the USB) was not soldered on one side. After having it soldered, the Cumana Reborn started to work flawlessly

Yes, that was the culprit in my case.

I had to touch it with my finger to see it was wobbly and that one connector was not soldered at all.
HigashiJun
Top

I removed the screws and inspected the PCB on both sides, it does not look like anything is not soldered, but there are a few of the surface mounted capacitors that seem quite unaligned, but not sure if that could cause the problem, it's hard to see if there are actual contacts or not.
Top

Then you have to check with your multimeter.
HigashiJun
Top

BTW, I have just tried your OricTech, Pushing The Env and Zerofx on my Cumana Reborn and none of them launches.

When I try Pushing The Envelope from my archives, it works.

I will have to investigate more when time allows.
HigashiJun
Top

HigashiJun wrote: ↑Tue Oct 11, 2022 2:21 am BTW, I have just tried your OricTech, Pushing The Env and Zerofx on my Cumana Reborn and none of them launches.

When I try Pushing The Envelope from my archives, it works.

I will have to investigate more when time allows.

This is weird.
So the same files work for freaktmp, but not for you

I wonder if my Cumana Reborn is not having other issues too.