This is the right place to discuss on how to implement hardware vsync, adding a VIA or AY chipset, puting multiple roms, or how to design a new flash expansion card.
Post Reply
4 posts • Page 1 of 1

This interesting bit of hardware, designed for the Apple II, nevertheless looks like something we could use with the Oric easily enough:

What do you guys think?
Top

Plenty of things can be done with ESP32, plenty of input/output pins, basically like an Arduino on steroids.

I guess technically it's not very different from one the 8bit dude did with the 8bit hub, an expansion board that gives internet access, mouse, joysticks.

Technically, if such a card was on the expansion bus (instead of parallel port), it would be probably much faster, but we know how the expansion bus of the Oric is, and the device itself would be useless without a floppy storage (real or sd card based), so that has to be compatible as well, and if we want things like speech synthesizer, etc... it needs proper address decoding.

I wonder if it would make sense to standardize some expansion port system, like what the guy who made the MEA8000 interface did: 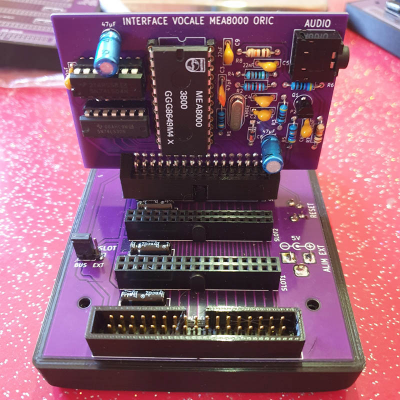 This thing allows to connect the Oric to the board, the board to a microdisc or cumulus, and you can plug the speech synthesizer on it, it comes with an external 5v PSU connector as well.
Top

Holy molies, that thing looks amazing. Where did you learn about it DBug?
Top

Yesterday I posted the link of all the schematics and photos on our SVN repository as well (with authorization from the author):
https://forum.defence-force.org/viewtop ... 005#p27005
Top
Post Reply
4 posts • Page 1 of 1