Newbie just got an Oric-1

If you want to ask questions about how the machine works, peculiar details, the differences between models, here it is !
How to program the oric hardware (VIA, FDC, ...) is also welcome.
Post Reply
18 posts

Newbie just got an Oric-1

I "grew up" with the home computer revolution of the 80s and as a result of that and more recent purchases I've got a reasonable collection of old computers and games consoles. Recently I decided to cure my curiosity about the Oric-1. One of my friends at school had one but I don't remember much apart from the rivalry between us lads deciding which was best, all of us seemed to end up with different computers - it was an interesting time.

I've ended up with a 16K version - with a power supply and little else. I've not even powered it up to see if it is working yet as it's in a queue of others to try. Could anybody offer some must does for Oric-1 ownership? Also is there actually much I can do with a 16K one? Do I need to try and upgrade the memory like you could with a Spectrum or are Oric's not like that?

Can I get any games for it to show other people what it can do and perhaps show it's best qualities? Can I get any on .wav files?

I've an Oric-1 16k too. But most of the time I'm using a emulateur. It's more to show a software and give it to anyone. I use Euphoric and it be able to use .wav files.You can find easilly .wav files on internet or you have also .TAP files too. With this last, you can create a .wav files using tap2wav.

So with your computer and an emulateur you can show everything about Oric. And after you can create a link to able to use the .wav file on it.
Top

Hi and welcome to Defence Force!

I seem to recall there being some way to upgrade a 16k Oric to full 48k .. but it may be hard to find the parts these days. This is something I encourage you to Google .. I haven't heard of anyone in my years on DF doing this hardware upgrade, but I do believe it can be done if you have the RAM part. Definitely something work checking out.

I have a few Oric products myself, ranging from my first computer, Oric-1, to a couple of ATMOS's (well, 7) and now even a Telestrat. So, you're in good company with regards to the lust for retro stuff! (I also have C64, Amiga, heck .. even a BeBox .. but thats for another thread some time maybe).

Anyway, for the most part I too use the Emulators out there. However, I've gotten in the habit of setting up an Atmos and booting up the new stuff thats coming out when it happens .. Space 1999, 133t, &etc. Its really a thrill to see some of this new code running on the ancient boxes IRL, so I encourage you to keep doing it. For software loading needs, I have .WAV's on a cheapo MP3 player .. it works quite well, just like the tape days. Of course, though, I got sick of that and have moved on to finally owning a disk subsystem (recently purchased), but the option is still there.

Welcome again, and I look forward to hearing any news you have about that upgrade!
Top

From memory, there's no easy way to upgrade a 16k Oric unless you're handy with a soldering iron, since it requires obtaining the correct type of RAM chips and soldering them into the vacant slots on the PCB. I don't recall there ever being external RAM expansion packs like the ZX81 and Spectrum had.

There are still some games playable on the 16k system, though they may not represent the true capabilities of the system. That's not to say they aren't playable enough games, just that they may be limited in graphics or variation in levels etc.

One of my fondest Oric memories is of playing Light Cycles:
http://www.oric.org/index.php?page=soft ... m_log=1432

Its fairly simplistic, but challenging and competitive when played against another human player.

http://www.oric.org is a good source for games. If you register and log in there you'll get the benefit of screenshots etc when looking at the game listings (unregistered users don't get this extra). You can convert the downloaded TAP files to WAV files for loading on real hardware. Personally I've had it work fine with an old iPod once I worked out the correct volume setting (roughly 3/4 volume on mine).

Having a quick rummage as I rack my memory for 16k games, Harrier Attack and Mushroom Mania are certainly worth a look.

If you're looking at 48k games, you should check out Xenon-1, Zorgon's Revenge, Rat Splat and of course, Defence Force.

The current best choice for emulation is Oricutron since it offers best compatibility with modern operating systems:
http://code.google.com/p/oriculator/downloads/list

Emulation is very handy for checking out the games before you start messing about trying to convert files for loading on real hardware.
Top

The 16k oric is both a curse and a bless.

It's a bless because it's kind of rare, you should definitely keep it as it is and not try to upgrade it.
It's a curse because most software runs only on 48k orics

Bah humbug, I say upgrade it! The parts are out there somewhere, I've seen someone do it (can't find the URL, alas) ..
Top

Hi and welcome to this community!

About the Oric-1 16K, well that is a though question. I'd say don't play with it, lest you may break something and render it useless... In addition, they are quite rare.

On the other hand, there is little software that would run on a 16K machine. So if you want to actually play games on the real machine, there is little option: upgrade (I'd also upgrade to the 1.1 ROM). If you are OK with playing with emulators and want to keep the Oric as an item in your collection or just for occasional use to play with it on your own, then leave it 16K.

Anyway, surf around oric.org to get some games, and this site for information, tricks and programming tips and enjoy your Oric!
Top

You're missing the 3rd option beyond leave it alone or upgrade: Buy another Oric

A 48k Atmos would sit nicely with a 16k Oric-1 to represent the main range.
Top

Good point! I've got one for sale, for a good price. PM me!

Dbug wrote:The 16k oric is both a curse and a bless.

It's a bless because it's kind of rare, you should definitely keep it as it is and not try to upgrade it.
It's a curse because most software runs only on 48k orics

First of all - thanks to all those that have taken the time to reply and made me feel very welcome. I thought you'd like to see my Oric so I've taken a photo and you can see it below.

I didn't realise that the 16K was so rare and as you say it's a mixed blessing. I've managed to join oric.org and download a game which I've run on the emulator recommended by Antiriad2097. I can see the use of the emulator for running 48K games or for trying stuff out quicker before running it on real kit. As there seems no easy route to 48K from 16K (much as I'm quite familiar with electronics) I will probably leave the rare beast alone. Would be a shame to spoil it really. Perhaps as Antiriad2097 and ibisum say it's better to get a 48K Atmos for the collection - though I'm not looking to spend too much at the moment and I guess Atmos fetch a fair price these days.

I've still yet to power it up and try loading anything. I will probably try to get light cycle onto a wav file to play from an mp3 player I have - probably the most likely thing to work. That is assuming the machine powers up ok and works! 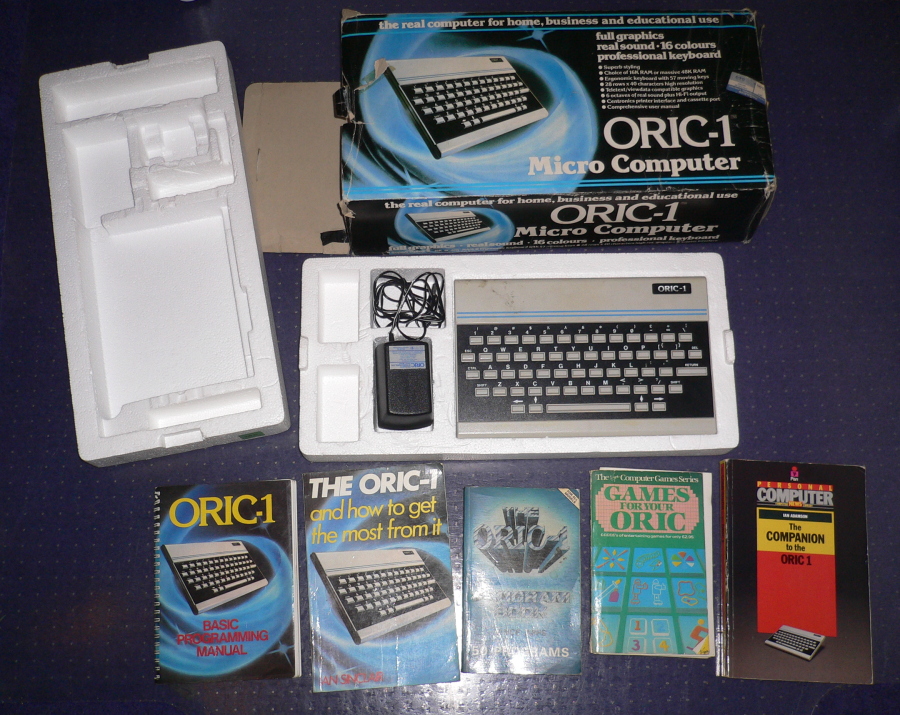 If you search on ebay and 'le bon coin' you can regularly find Atmos to a reasonable price.

35 euros, without the video cable and power brick, but since you have an Oric 1 and since the hardware is mostly the same you can use the Oric 1 cables and they would work just fine on the atmos

There's few Atmos, from 'make offer', to 89 euros the machine alone, to 260 euros with a MCP40 printer and games and manuals.
Top

I'd not thought of looking on ebay.fr, seems obvious now you've said it. Can you tell me anything about how to use leboncoin ? Never heard of it before.

Could not resist taking the Oric apart to see how it's made. It certainly seems nicely put together, sturdy case well made PCB etc. Just for interest I've taken a photo... 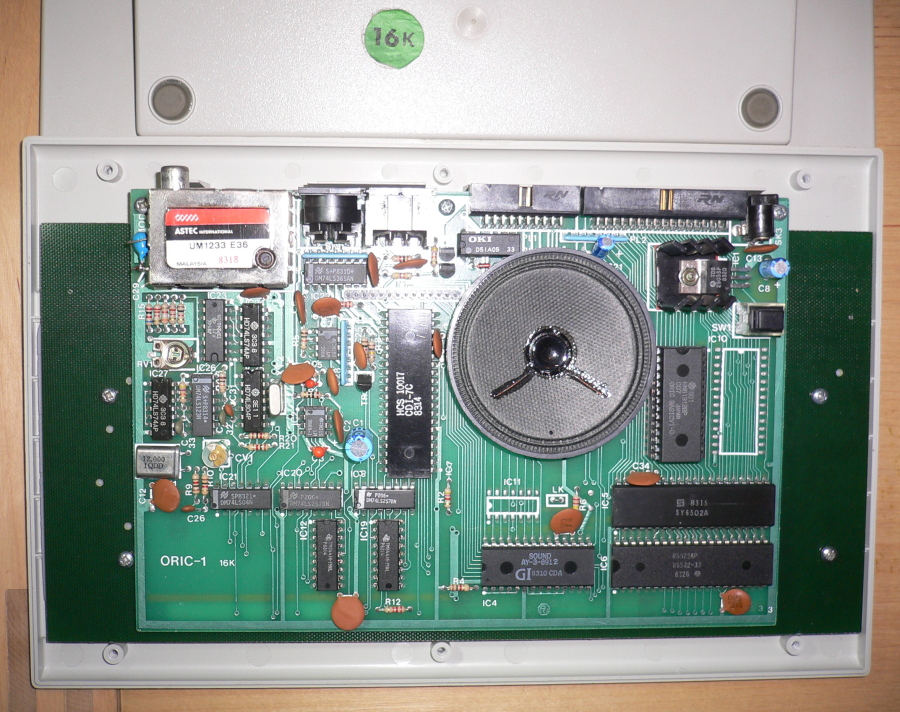 All you've got to do is wire in the missing ARM, and oila - upgrade!

Seriously though, I have a spare Atmos and I'd be happy to sell it for a fair price - not trying to profit. Make me an offer of what you can afford by PM and we'll see if we can just bump you into Atmos territory easily enough.

Or, do the ebay.fr thing .. often there are great deals which include other accessories too. I have to stop watching for those, because I already have too much ..
Top

Although rather useless except for testing, I certainly would never upgrade a 16k Oric-1, they're quite rare!

BTW I would not recommand leboncoin unless you can meet the seller to get the item and pay him. There are lots of scams there, for instance the last Telestrat that sold at 800 euros on Ebay: one could see the exact same pictures on leboncoin 2 days later, sold for "only" 600 euros, which of course was a fake. Some guys are looking for what makes money on Ebay and try to "sell" the same on leboncoin 25% less, for 100% profit.
Top
Post Reply
18 posts