If you want to ask questions about how the machine works, peculiar details, the differences between models, here it is !
How to program the oric hardware (VIA, FDC, ...) is also welcome.
Post Reply
21 posts

One of my friends is in need of a power supply for his Microdisc. The main problem seems to be the round connectors.
Is there something that could be bought to make these leads?

I have a power supply that would work on the drives. Normally the Oric is powered from the Microdisc power supply. How much of an issue is this ?
My power supply has four floppy drive outputs. Potentially I could power the Atmos from the 12V of one of the Floppy outputs - would that be OK ?
Top

Reference to Microdisc connectors here and here (China 10 pcs cheep but long waiting) and an eBay search.
Maybe you can find them somewhere closer to your place.

About the power supply - I suppose you have a PC PSU - if so DON'T USE the 12V to power Oric together with Microdisc and floppies - there will be fire! It's possible but you need to remove internal 5V regulator (i.e. 7905) and connect 5V directly to motherboard tracks.
Top

I don't own a Microdisc but I know the 3" drives normally require 12V (as in Amstrad CPC's), so I suppose the Microdisc power connector should have at least +5V, +12V and GND terminals.

As to powering the Oric, normally this is done directly from the Microdisc through the ribbon cable to the Oric, and this provides the Oric with regulated 5V (directly to the 6502 bus), and the 7905 regulator is completely bypassed in this instance anyway.

However, if you ever want to power directly the Oric (through the power input jack), I wouldn't feed it 12V as it may cause excessive heating or even probably failure of the 7905 regulator.

In any case you must not power the Oric through the jack if it is already conencted to a Microdisc using a ribbon cable that provides power directly to the 6502 bus.

+1 to what Laurent said.

The controller could power the Oric through the expansion bus... Not sure if the original did this, but if it did it is much better as your Oric will be warmer. In fact I think it did not, after checking the Microdisc manual, where it states that there is a mini-jack pluig coming out of the Microdisc PSU to plug into the Oric (I'd bet it has 9V).

If powering the Microdisk and the Oric through its socket, I don't know why iss said you should not use the same PSU to avoid problems. You'd need to get 9V, though. I also advice against using a 12V PSU. Oric's original has 9V and even 7.5 should be usable. All the voltage down to 5V is converted to heat!
Top

laurentd75 wrote: ↑
Tue Apr 17, 2018 1:38 pm
As to powering the Oric, normally this is done directly from the Microdisc through the ribbon cable to the Oric...

I think normally you can't power Oric with the ribbon cable.
This is original Microdisc controller - pin 33 on the ribbon connector is not connected to +5V track. Yes, it looks like it's manually cut, but it is not. 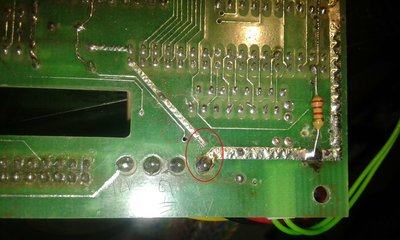 and here is again an original Microdisc 'last generation' - pin 33 has nothing at all. 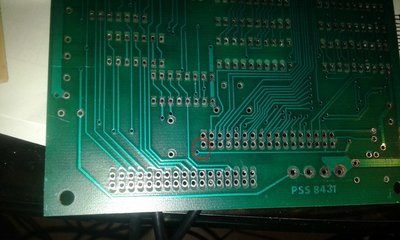 And about the PSU. Here is one broken original Microdisc PSU - the plastic insulation is so old that it's not 'plastic' anymore. It waits silently its turn to be repaired one day... 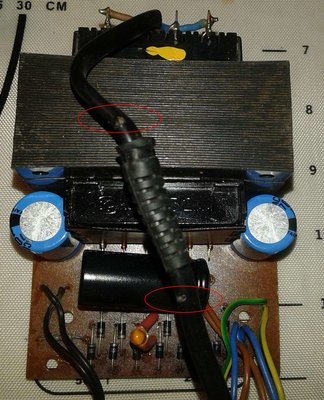 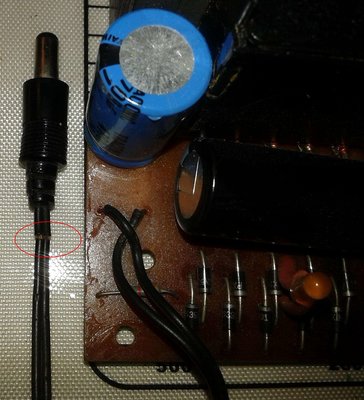 But more interesting here is the schematic (sorry for the ugly drawing):

Important thing is that the secondary coil and the rectifier circuit for the Oric's 9V is completely independent to the +5V and +12V for Microdisc.
When I said to not use single PSU I mean PC PSU - where +5V and +12V are not independent - it this case if you connect +5V and +12V to the controller and +12V to the Oric power jack - it will act as 'short connection' between both voltages. I don't know if I explained correctly but just be careful!
Top

iss wrote: ↑
Tue Apr 17, 2018 9:29 pm
I think normally you can't power Oric with the ribbon cable.
This is original Microdisc controller - pin 33 on the ribbon connector is not connected to +5V track. Yes, it looks like it's manually cut, but it is not.m1.jpg
and here is again an original Microdisc 'last generation' - pin 33 has nothing at all.m2.jpg
Silicebit's controller is completely another case - it has jumper and you CAN feed Oric with +5V.

Thanks for the info iss, I've always thought the Microdisc was feeding 5V to the Oric thru the bus... What made me so sure is I've got a modern Microdisc "clone" built by Fred72 and this one does feed the 5V thru the bus, that's why I was thinking it was the way to go...

Now you've got me wondering.... I hope there's nothing wrong powering the Oric directly through the bus?? I would suppose it is OK as the controller is supposed to generated a regulated 5V voltage that *should* protect the line against any surges, but maybe there's a risk especially when powering on, for a voltage or current surge??

On the other hand it looks Silicebit went more or less the same way as Fred72 with his Microdisc clone, but then why did he include a jumper? Why is he giving a "choice" here?

Anyway, I'm a total noob at electronics, so I can't really know the risks involved or which "method" is best...

Hehe thanks for clarifying everything iss!

Yes, as I suspected after reading the manual the original Microdisc did not power the Oric though the expansion port. Wonder why not.

I guess Silicebit just made the clone, then realized it could be possible so he added the jumper, just in case there was some incompatibility.
Top

will work always.
Although for me it's not good practice for very simple reason - the purpose of ribbon cables (and connectors) are to be signal cables i.e. for low currents (for instance about 100mA) where Oric wants >600mA and as result this can lead to bad contact and unstable work. That's it!

Ah, thanks iss for going into it a little deeper.

I did question myself about the "size of the pipe", how it was possible to ffed many hundreds of milliamps just over one little wire, and I have to say sometimes it must not be enough as there are cases where my Oric won't boot on first try, so maybe it's why it's a bit unstable.

I was wondering what amps the 9v Microdisc supply puts out? I'm guessing the Oric needs a bit more with the drives connected (?)
(I don't think it says on the label.)

My plan is to produce cables for a power supply I have that powers two floppies. Then have this and the Atmos power supply on an extension lead block so that both can be switched on at the same time.

My friend just missed out on the power supply I told him about on Ebay - Gah! How much are they worth now? I think that one sold for £75
Top

My old Oric Microdisc PSU is scary, heavy, and doing some zzzzzzzzz noise, so I'd like to replace by something modern and compact that could power up to 4 drives, and the Oric itself (as well as the Scart power).

That means finding something that basically delivers the type of power as a PC psu, but in a safe to use plastic enclosure without fans, and with enough power to deliver to all the potential drives...

I also vaguely remember somebody telling me that there was a difference between the Atmos and Telestrat power units, that somewhat there was a non standard +5/+12 order on the molex connectors, which makes me take my time and not urge on the project

EDIT: Here are photos of the PSU after it was repaired by the CEO (it's the one from my Telestrat, but I'm not sure I can use it on my Atmos because of the label) 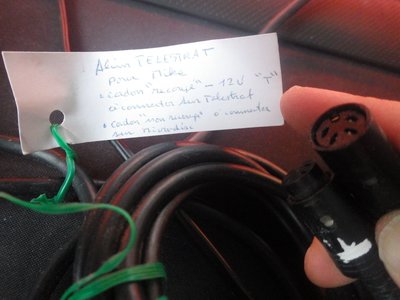 That one says:
"Telestrat PSU for Mike"
- "recut" -12v cable "T" to connect on Telestrat
- "uncut" cable to connect to Microdisc 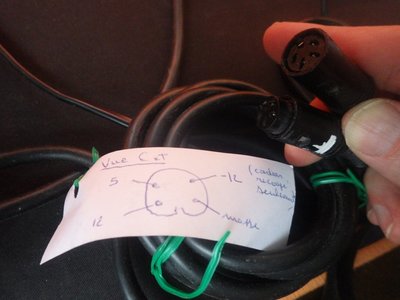 I am quite sure the +12 and +5 cables where switched. Silicebit's clone had he Molex connector plugged under the board to allow direct plug of a PC power source (avoiding confusions).

So I'd bet you can unplug (cut) the +12 and check if the board works, avoiding to fry the ICs if you feed them with 12v.

Now, how the Microdisc unit powered the Oric is beyond me. I think there was some information and it was a completely different circuit to provide the 9v, but I am not sure. 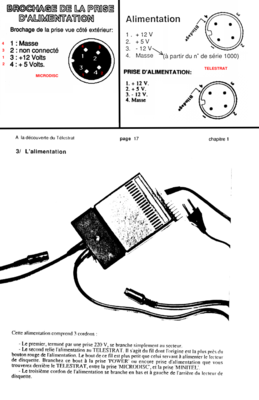 I've rotated the connectors on the right to match the left picture.
So, the hand-written notes on your pictures are confirmed.

That's borderline criminal...
I wonder how many telestrats and microdiscs got destroyed because of that, why did they use the same connector???
Top
Post Reply
21 posts