Although I have been following this forum for a few years now, I introduce myself.
As a child my first computer was a c64. The truth is that I think it was one of those coincidences in life because it came to me from some german cousins. If not, I think an Atmos is what would have ended up in my house since a friend of my father was an oric distributor in Reus and I remember seeing it in the shop window.
The Oric crossed paths again in my life when at my school, at the age of 14 and in 1984, the computer classes began and you can already guess which computer it was with.
The third coincidence was finding that my first girlfriend had an Oric1. In the end of this relationship, she gave it to me; D

As a curiosity I attach a photo of a guide on the different distributors that were in Catalonia of Oric. Without knowing it beforehand, in Reus, a city that had 50,000 inhabitants at the time, there were 3 official distributors. 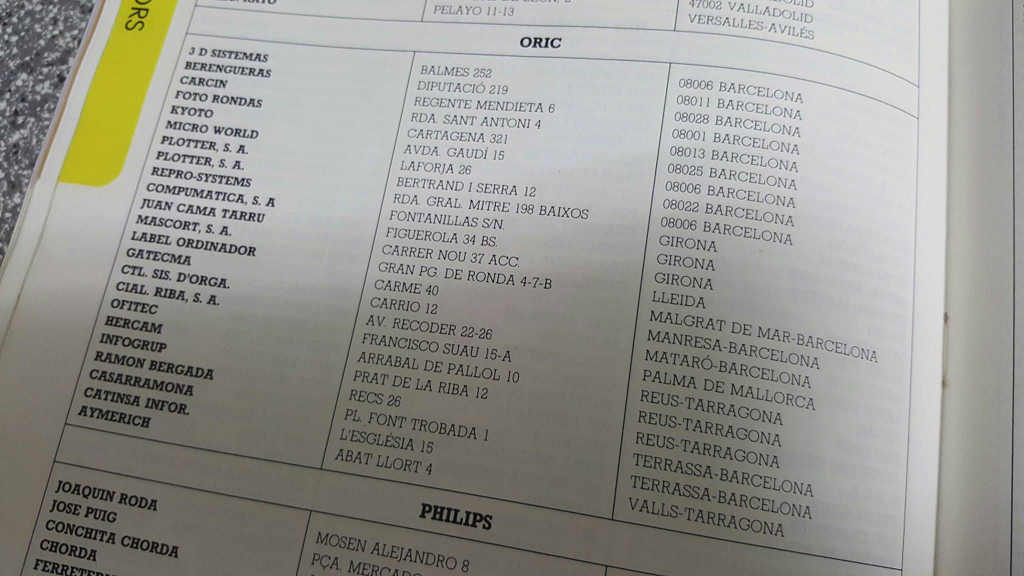 I currently do text adventures with The Quill, originally for commodore 64 and then some friends traslate them to other systems. I do the conversion to Oric and then Chema Enguita helps me with the rest so that a version can come out as neat as possible. The pity is that in Oric there was no conversion of Illustrator, the graphic program that came with The Qull and with which graphics are generated in a simple but correct way.

That's quite a decent presence in Spain, in term of commercial network

I originally I got an Oric because my "team leader" in the boy scouts ("Éclaireurs de France") has one. Ultimately you need a criteria to pickup something, the Atmos was far to be the "best" in term of specs, but I could afford that one, it was pretty, and it had an awesome user manual to learn programming, and I've never known anyone with a C64 in my home city anyway

Nice to learn of Orics' success in Spain! For my part, I also got the Oric-1 in 1983 through a friend of the family, who was the distributor in Australia at the time. Everyone else had C64's - I wanted the Oric mostly because I'd heard a rumour there'd be a modem for it, and disc drives too .. and I figured I'd get the hardware from our friend.

Well in fact, the Oric made me a programmer, because there was hardly anything available for it and so I had to write code. When I finally got a system that supported a modem, though ..
Top

Nice to meet you

and congrats for el prisonero

I don't think the Oric really was very popular and in my small town I didn't know anyone who had it. That my ex-partner had it was pure chance.
Here the normal thing is that people had ZX Spectrum or Amstrad CPC but choosing the system was more a matter of fortune than own criterion. Parents bought the cheapest one, or the one from a friend who owned an appliance or typewriter store, or the one sold in the mall.
In my case, and I imagine that of many, our opinion was rarely conclusive.
Top

In the Canary Islands there is a group of computer users and I believe that at least one of them was an oric user
https://www.canariasgoretro.org/

Thanks so much for posting that link. It would be awesome to attend a retro meet over here.

Re. Spanish, I took a LOAD of lessons which helped. I can 'get by' and understand the basics but working from home doesn't help me mingle with the locals. Most of the expats out here don't speak a word of Spanish and have no intention of learning, so I can't even practice with them.
Top

We hear the story a lot. Even here in England. My friends had BBC computers, Spectrums and more.
I went to a night school class to learn computing. The teacher had an Apple II. Some of the students had a portable C64, BBC and Texas Instruments TI99/4A. I had a ZX81 when they were reduced to £39.95. I used to carry a large B&W television to the class. I didn't have a good cassette player so the programs were lost each time. I asked the teachers about the Oric-1 and they thought the spec was OK. I didn't know any that had one.

I got the Oric-1 16K second-hand, because I couldn't afford anything better. Later I managed to get a 48K one. By that time any Oric support in the shops was vanishing so it was hard to get any software for it. I wanted a computer I could get games for so eventually bought my friends Spectrum 128K.
It was only when I went back to college in Edinburgh that I started looking again for Oric things and managed to buy an Atmos. With the Atmos I had a user group address, so I joined OUM and found out about all the software I'd missed.

A story that gets repeated in OUM is the one about each of us feeling alone and not knowing another Oric user.
Last edited by Steve M on Wed Jan 13, 2021 3:40 pm, edited 1 time in total.
Top

Hola to Bieno and Steve M's story. Same here;
I got an Oric-1 in late 1983 - only reason to choose Oric was what I could afford and I didn't know much (anything) about computers but I was only 13..

However with no software available (all the shops were selling C64, Spectrum etc.) and with no real money to buy, it forced me to learn programming than to play games.

That was the most important thing Oric gave to me, to start programming - I could imagine otherwise the temptation to just play the latest games and swap games with kids at school.

So the Oric's rareness was a bonus for me (maybe I would anyway have learned programming as I am a nerd at heart).

To Bieno - sad that your relationship with your girlfriend ended, but it was more than offset by the wonderful gift of the Oric she gave you!