Yeah, I tried to do so. Not only a checksum, but also some bits are tested for inconsistencies. I am not sure about how well it works with random passwords. It should perform OK, and I made some tests just to get an Incorrect Passcode message.

On the other hand, this is basically a shoot'em'up so there's really little reason for saving your status between plays (most games in this genre simply don't). However I know how frustrating is to be able to go up many levels and having to start again from scratch. Moreover when difficulty is very progressive. Hence the addition of this system, so you can write down the passcode at certain levels if you wish), and resume the game in case you unplug the power cable by accident

Hi guys! Just a quick note reporting I am still working on this, but I have been busy on my music player (the one which also plays the SFXs) experimenting how simple tunes work and hunting some hideous bugs.

This is quite a tough area, and I am completely new to it, so it is taking ages to finish. However I have a quite decent player now which should serve its purpose (now that I found a bug with the ADSR system spotted by Dbug). I also translated some tunes. Some work, some don't. I guess it is a matter of trial/error, because I need to figure out which kind of tunes could work in the end. And, believe me, translating a song to the player is not an easy task. Well, in fact it is not *really* difficult, but it takes a lot of time and experimenting.

It is not a matter of producing nice songs, the player is too simplistic, but having some small chords playing at given moments.

Well, at least I can show you some advances, though still many things to be done.

This video shows a demo of the gameplay for the first level in the Tutorial phase. The objective is using the switches over the ship's surface to lit the four leds in the scorepanel. Seems easy, and it is for the first levels, but it gets complicated quickly. Also you don't want to destroy the ship too early, because you may lose collecting points and other extras that you may need in further levels.

Hitting enemies gives you points. Sometimes they drop things that you can collect. Some are things like extra lives, others just increase the retr-o-meter bar (the lower one on the right of the scorepanel). When it is full, you'll receive an extra life. Your hitpoints are indicated by the upper bar on the scorepanel. You can recharge it by collecting the energy glowing balls on the ship surface.

Destroying objectives on the main ship will give you bonus when the level is finished.

I have plans for adding bonus levels and other details, and also I need to add music and some "action" to the main screen, but you can have a good idea about how the game is going.

Comments and suggestions are welcome, as usual.

I like the way the ship is destroyed at the end ... good stuff.
Top

Thanks for the comments, people. I am trying to polish some details because, as the game itself is not as complex as others I've done, I'd like it to be full of little details.

. For now these are the extras available and their graphic representations:
- Extra life (heart)
- Destroy all enemies (bomb)
- Quick shot (joystick, due to evident reasons)
- Super-charged shot that does not disappear when hitting enemies (skull)

Still testing them, but beware some may not survive in the final version. Probably the first two will and also probably the super-charged shot. The quick shot needs more testing because too fast shooting creates lots of lasers moving around overloading the graphic engine. If drawing everything takes too much, I start losing frames which is something I want to avoid.

I think I found a good balance between shot speed without losing performance, but need more testing.

I have another power up in mind involving a temporary freeze of the enemies (graphic: fruit), but that needs to be coded. And yet another idea with a very rare powerup that could make you advance the level without actually solving the switch puzzle. But not sure if this will see the light in the end.

There are another 8 different items, which are just for recharging your retr-o-meter bar, which (as I already said) will give you an extra life when full.

Oh, and I have added a first bonus screen 'survive the onslaught' (suggested by Dbug, as usual!) where you have to finish all the incoming enemies to advance to the next mother ship.

Still some work to do, but this is taking shape

The scrolling is pleasant to see.

It seems easy to move the ship. Congratulations !

I love watching your progress on this project .. its really inspiring.

The only thing I can say though, is it sure would be nice to have a few splashes of color in the game, somehow - maybe the monochrome style can be used as the 'main gameplay' color scheme, but when events occur - explosions, targets being hit, etc. - then it would be great to work out some way to add some really fancy splashes of color - just for effect.

@ibisum, I'm afraid color is not something feasible right now. I made some tests, but results were not good. Using attributes is not possible without horrible color clash and lateral effects (or a lot of hack into the code, I guess). Setting the invert bit as in AIC mode here does not produce nice results: you get blocky color areas with a lot of clashing (in AIC this is minor because it affects only one scan) and the core drawing routines must be tweaked to deal with the inversion of the bitmaps (black becomes white) reducing speed.

I also tried coloring some decorations with no real good results, so I have dropped it right now. I prefer to concentrate in neater graphics, animations, little touches and overall good speed.

I have been playing with other details these days. Mainly with some bonus levels. I have coded a first approach to the "Into the Labyrinth" bonus level. Nice thing is that is procedurally generated, with a small routine, so I can have some of these spread into the game levels without losing much space. 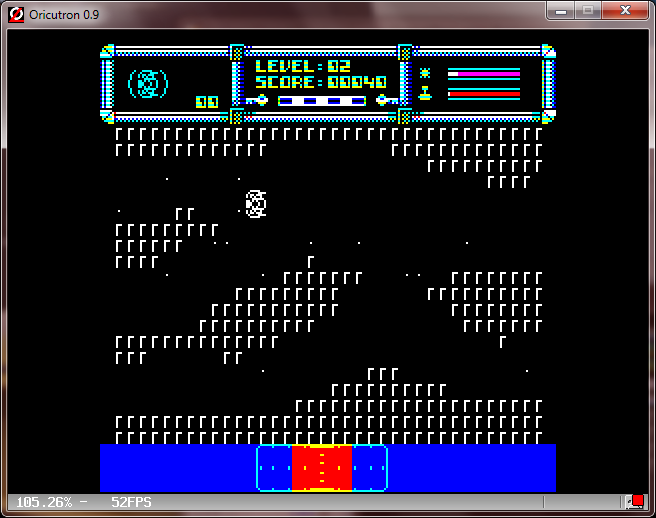 It may seem you're alone, but enemies are lurking and ready to appear at any time!
Top


I was reading the story about the production of R-Type for the ZX Spectrum yesterday, and was mightily reminded of the work you're doing on this scrolling-shooter, gee .. if only we had a time machine to take your work back to 1984.

I think when you're finished with this project it'll be the best side-scrolling shooter for the Oric out there .. my how far we've come from Harrier Attack!

The labyrinth gets a thumbs up from me...

'Into the Labyrinth' and 'Survive the Onslaught' levels are in now. I may need to tweak where they are appearing, but i am quite happy with the result. They appear first within the tutorial phase and they are quite easy, but the second labyrinth, which appears later on, is tricky enough as to make you lose a couple of lives if you are not cautious.

I am now more skilled with the game and I can proceed to level 12 quite easily. Beyond that, that is another story, as it starts becoming really difficult.

The game is basically a switch puzzle, and is quite straightforward up to level 5. So once you get used to deal with barriers and enemies, it seems really easy to advance levels. I find it quite fun to progress at a relatively high pace, but others may not and would prefer longer-to-solve levels, more variety or just killing enemies. Also you need to develop some kind of strategy to keep your life, energy and retr-o-meter high for more difficult levels. When the puzzle get tougher, you'll need also some kind of strategy to solve it.

Anyway I have sent Godzil a copy and will also send one to those interested in beta testing (when I have a beta version, that is) so I can collect impressions and ideas. It worries me that a game which is not a version of a classic, may not be found fun to play.

I have also setup a Bonus Chart screen, but still have to work the cycling between the menu and other screens, add music there and other details. Oh, and still some features are out, such as one powerup, the volume setting, the AI of one special enemy which is going to cause you trouble in higher levels, etc.

I don't know where I will find free time to advance quicker, but I'll try, because I don't want this project to last for another year!
Top

I would like to thank you a lot for the beta version, I'm really impressed by the work you did. I wasn't able to test it right now on the real hardware, first will be on saturday

Anyway I've tested on Oricutron and I'm really please to say that it works and I liked it!