And I can confirm it works in Oricutron too. It was a kind of a mess of versions and emails which created all this confusion.

I need to point out that there's been some heroic efforts from Fabrice and Chema in trying to get the old code to compile "clean" with the modern tools, and if that happens, we may release the entire source code of the new "clean" Pinforic so it does not get lost and other people can make Z based games

Congrats for the release. It's always pleasure to see finished projects, made with style!
Top

Yes! I wasn't expecting Fabrice and Chema to put in more hours all those years later, but they did and it's awesome

I didn't want to announce anything about Pinforic because it's not my place - my contribution was mostly cheering on the sidelines xD thank you Fabrice, Chema, and Dbug!
Top

Super work!
Not only an excellent one disk Oric version, but to my surprise also finally a real 80 column Commodore 128 version.

So updated the picture of the two running at the same time: 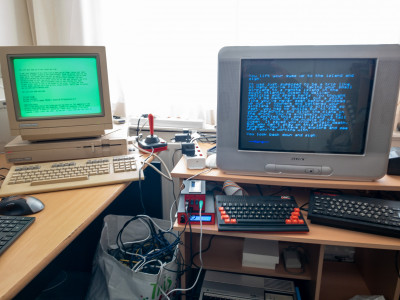 Funny. By coincidence I was already testing the new Ozmoo C128 version also because via via I was approached as they wanted to test if it worked on a C128D 16k VDC version which I have.....
Did already want to message you to ask if you wanted to do that version as well if the new Ozmoo was released, but evidently reading your readme you were one of the testers as well

But have to save for getting a TIPI on my TI-99/4a to get disk emulation on that machine first, also saving for a vDrive microdrive emulation on my ZX Spectrum 128 which maybe might be a possibility for you to port also to....
Top
Post Reply
20 posts