I'm pleased to announce the upcoming release of a new game for Oric Atmos / Telestrat! The game is "Tristam Island", an Infocom-style text adventure. Here's a quick pitch:
After a plane crash, you wash up on an island in the middle of the Atlantic Ocean... and find out it used to be inhabited! But why did everyone leave? And what secrets lie in the white house at the top of the hill?

I managed to make it work in an emulator using Pinforic yesterday, with help from Fabrice and Chema (thanks!). There will be a digital release on itch.io, and possibly a physical release (I haven't asked my publisher yet, but it should be doable. Is there is any interest? Anyone here would like a boxed set containing the disks and some feelies, just like Infocom used to do?

I'm also going to talk a little bit about the tools I used, for anyone interested in writing their own text adventures for the Oric.
I used Inform 6 to create the game; Inform 6 allows you to create a Z-machine file that can be read by Infocom interpreters, but until recently the output to Z-Machine v3 (the one read by Pinforic, and all the other early 80s computers) was broken. It was fixed a few months ago, so you can use version 6.34 of the I6 compiler (source here) to write a ".z3" game.
I also use the library PunyInform, a brand-new compact library that only takes 25kb of space (instead of 50-60k in the standard Inform 6 library); this leaves over 100kb for the code and the text (no pictures, though!).
Once you have the z3 file, you need to put it on a physical disk; or if you want to use it in an emulator, you need to use raw2mfm to convert the MS-DOS formatted disk into an "Euphoria style" disk. My script on Linux is as follows:

The source for raw2mfm can be found on sourceforge, but it's a rather old version; Fabrice gave me a newer version that compiles without a problem with gcc. (I'll let him put it here?)

Let me know if you have any questions, and I hope that you are as excited as me about this upcoming release

So, question: In the end, do you have the game on ONE or TWO floppies?
Top

One floppy for Pinforic, that you insert first, then you start pinforic; then you take it out, and you put in the floppy that contains the story file, and you hit a key. Pinforic puts the savegames on that floppy, with the story file.
Top

When is it due to be released ?

Are you going to sell it?
Top

Are you going to sell it?

Not sure on the release date, probably October-November, and hopefully December for the physical release?

And yes, I'll be selling it, but only ~4€ to get all the digital versions; for the phyisical versions (with disks, map and feelies), I believe my publisher usually sells them for 20-25€, though I dont know if that includes shipping or not.
Top

The free demo is out, and the full game will be released digitally on November 20th; you can preorder it right here if you liked the demo!

Please let me know if you have any trouble! (manual is included) And I hope you enjoy it!
Top

Thank you very much
Top 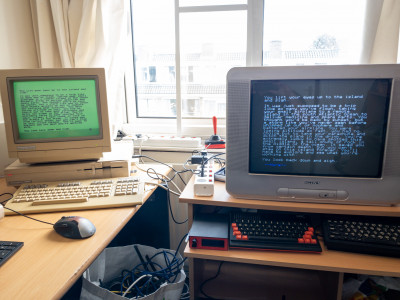 Nice! Starting up on two machines at the same time now: my C128D and my Oric Atmos.

Was never much into text adventures myself as well, but am going to give this one a try when I have more time. Pre-ordered for now.

PS: The Spectrum version works only on the +3 I see, so it won't work on my ZX Spectrum 128? And no disk drive (emulation) yet on my TI-99/4a, so can not give that a try yet. Have a FinalGROM99 cartridge emulator, so might look for an option to compile it to a cart image.
Top

Thank you very much

Thank you for your kind words! That means a lot!

If you are stuck, try using the same phrasings as in the text. I tried to make the parser as smooth and understanding as possible. And feel free to explore, you can't get trapped or lose in this game!
Top

Was never much into text adventures myself as well, but am going to give this one a try when I have more time. Pre-ordered for now.

PS: The Spectrum version works only on the +3 I see, so it won't work on my ZX Spectrum 128? And no disk drive (emulation) yet on my TI-99/4a, so can not give that a try yet. Have a FinalGROM99 cartridge emulator, so might look for an option to compile it to a cart image.

That is awesome! Can I use that picture on my twitter feed, with credit?

Thank you for the preorder!
And yes, Spectrums are tricky because that kind of game doesn't fit all in RAM, and so you can't do a tape release. The Spectrum +3 has a disk drive so it works fine. I don't think I can get my game to work on a Spectrum 128.
As for the TI-99/4A, you could try asking on the atariage forum? (Be warned, I'm uploading a new version tomorrow - same game, better TI-99/4A interpreter.) The community there has been amazing, and I think my game has sparked some new activity on the development of the interpreter. They are working on a version that could support accents, which is exciting

Ah, of course, makes perfect sense. Actually, obtaining a ZX vDrive (https://vdrivezx.com/vdrivezx/) is still on my way too long retro want list. Do not have one yet for certainly the foreseable future so please do not interpret it as urgent feature request, but would Microdrive compatibility be possible?

Thanks! Have already an account on that forum as well, so will have a look at what is happening in the topic you refer to.

Thank you very much

Don't worry JB, apparently hlabrande has plans to make a French translation at some point.

However, I would advise you to persevere with the English version, it is a perfect opportunity to hone your English skills!

And it is quite an easy exercise with the help of an English/French dictionary such as https://www.wordreference.com/, or better by just using an English dictionary such as https://www.dictionary.com/ (with its associated thesaurus at https://www.thesaurus.com/) which will reinforce further your knowledge of new words and as a bonus teach you the correct pronunciation (as one of the major hurdles in English is you can't guess pronunciation of words by their spelling as in French...)!

Anyway, this is one of the most effective methods I've used to perfect my command of English, by playing text adventures and also reading a lot of books in English with the help of a dictionary to look up words I didn't know... After a while, you find you learn a lot and don't need to resort as much to the dictionary...

PS - since you mentioned this is the first text adventure game you've ever played, there is an Oric textual (with some graphics) game adventure you MUST absolutely try: The Hobbit !! This is a masterpiece on the Oric, though it is very hard... Never finished it myself but I think there are plenty of hints and walkthroughs on the Internet nowadays to get through it... I must have another go at it myself someday...

Ha, you have to learn that trick in French someday to me then

Biassed of course because I use and have practiced English way more than my infant highschool French, but had much more difficulties in spelling French correctly in high school than English......
Actually have more difficulties in spelling Dutch correctly than English while Dutch is my native tongue. But that is also because, altough I work at a Dutch company, all written communication at my work is in English, so hardly ever write anything in Dutch anymore where spelling matters much.
Top

Well xahmol, I was a bit biassed myself in pretending French is so simple, of course there are many exceptions, but for starters you don't have to bother with accentuation as in English, and second there are (I think) much fewer 'exceptions' to the basic rule that all basic blocks are always pronounced the same and there are much fewer silent letters.

In English, you have all the words where the 'k' or 'w' is silent (as in knight, knowledge, sword... but not in swallow !!) or the 'c' (as in 'indict'), not to mention that the 'ed' ending is sometimes pronounced 'id' (as in 'wicked') and sometimes not (as in ''linked' pronounced 'linkt'), and sometimes 'it depends on the exact meaning (as in 'blessed', see https://www.dictionary.com/browse/blessed), etc etc...

Now, maybe one of the easiest languages in terms of spelling and pronunciation is Spanish... even the accents are logically placed if the accentuation of the word is not 'standard', and there aren't many (to my knowledge) exceptions to spelling rules

Hello! I'm happy to announce the full release of my text adventure "Tristam Island" for the Oric Atmos and Telestrat

The game was made in the mold of Infocom interactive fiction, with a smooth parser and lots of puzzles (but no way to get locked out of victory); it should be around 7-10 hours of gameplay. It comes with a hint sheet and a feelie (a postcard set in the game's universe). There probably will be a physical release, but I don't have more information about it right now.

Fabrice and Chema were kind enough to make a single-disk version, that boots and directly starts the game in Pinforic! It should work on Atmos and Telestrat with Microdisk, and maybe even Jasmin (I think they couldn't find real-life hardware to test it). Give it a try

Note that it doesn't work on some emulators (like Oricutron), but it works on Euphoric. The usual "two-disk" setup is also included; that one should work everywhere.

I hope you enjoy it! The response from the Oric community has been great (for the demo, the Oric version is in the top 10 most downloaded versions!), and I'm excited to support the Oric, and maybe hopefully bring a French version of my game to this platform in 2021