I have been working on a game project for several 8 bit platforms and one of them is the Oric.

I am hoping to keep motivated and finish the game 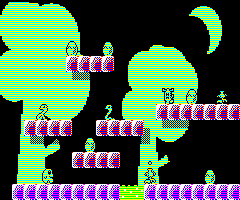 Thank you guys for the support.

I have two more options regarding the background, which one is your favourite, Version 1 , Version 2 or Version 3?

Of course these pictures are pixel sharp I wonder how would they look on a TV set... which is something to take in account I guess. 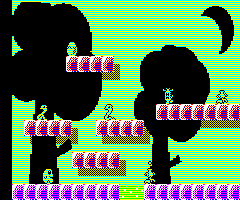 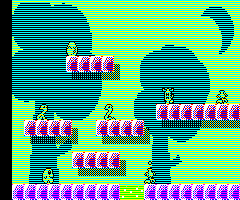 Well that depends on personal tastes, I guess. But I'd say that, when using AIC, it is always better to keep the background as black, so objects can be colored better. It usually looks better and hurts eyes less.

In your case you could use patterns to distinguish the tree trunks from the green leaves, or nice colored stars... Also you could even get a white moon by using inverse on black.

Obviously it is not always possible. In that case patterns in the background also help to reduce the stripped looking of the AIC.

But that is just me

Re: background - I agree with Chema, keep things simple (black) at first, and then push AIC into good effect .. but honestly if I had to take just one out of the three, I'd go for #3 - it looks the neatest and gives me that old "I'm an Oric fanboix, and I can't help but be excited about seeing multiple colours on the screen without attribute clash" feeling, which I've come to love over the years.

But yeah this game looks great, and I can't wait for more news about updates and progress! If you need help testing ..

But that feeling might be different on a full screen, with AIC I think it's a goor idea to test on small and large screens to help in the final design choice.
Top

It's also maybe possible to use an intermediate representation for the trees using some dithering: 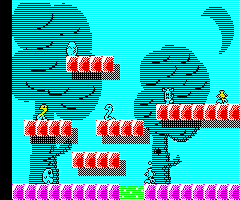 Thank you so much guys, I will now leave this question of the background to rest and later on when I come back to it I shall take in consideration what you said above.

The next step is to implement the sprite engine; I have coded several versions for other projects, some are faster but eat a lot of memory others are slower but are not so bad in terms of memory, I just will have to find an acceptable balance between speed and memory. I am wondering if I will need some kind of screen synchronization before copying from the back buffer to the screen to avoid tearing or some sprites vanishing altogether.

I need to think about the score panel too - one line at the top or use the text area below the bitmap... hmm.
Twitter: @newIapetus
Ko-fi:iapetusretrostuff
itch.io: Iapetus
Youtube: Iapetus Retro Stuff
Top

You can also add details to the trees or other elements on the first example. And notice how block shadows are only cast o elements, and do not appear in the black background. It looks better that way, in my opinion.

I am not sure about how you are coloring... do you have alternating cyan/green ink attributes on all the screen and use paper for black? That is what I do in Blake's 7, although for some screens the attributes on the first column change.

About the sprite thing... in my experience it is almost always better to code for speed and then, once the graphic engine is as fast as it can be, worry about memory. But that depends on the game...
Top

Thank you for your insights Chema. I would like to have the game working on 48Kb (tape) but having extra 16Kb is so tempting...

For the score panel, don't forget that you have two complete character sets you can use (ALT + STD) and also the possibility to use double size characters.

Regarding the memory usage, making the game disk only also has the advantage of giving you access to fast interrupts (nice if you want to play sample sounds for example), more memory obviously (which is nice to have multiple buffers or long sprite animations), you can have intro sequences that don't use actual game memory, more level variety, etc...

The Oric computers have been having shitty games for a long while in comparison to say Atari XL and Commodore 64 also for this reason: There was no floppy based games, so all the games had to be small, limited graphics, limited audio, ... these days everybody is jumping on the new disk controllers, SD card emulators, etc... there's never been that many people able to actually play these floppy based games on the real hardware: Embrace it!
Top

Thanks Dbug, if there are many users using floppy disk drives or modern alternatives then certainly it is worth using the extra 16Kb.
Twitter: @newIapetus
Ko-fi:iapetusretrostuff
itch.io: Iapetus
Youtube: Iapetus Retro Stuff
Top
Post Reply
40 posts