New here, nice to see the Orics still have support in 2016

I own http://www.binarydinosaurs.co.uk and am trying to resurrect my Oric 1s and Atmos' for an upcoming exhibition in the UK and have to admit I'm struggling with getting my machines to do anything other than boot SEDORIC V1 or *nearly* load a game from tape, though I'm impressed that out of 5 machines only 1 has any sort of failure with a dead ULA.

All my stuff has been stored indoors in boxes so it was nice to see the Cumana floppy interface and twin drive burst into life last weekend. Pity that none of the games I remember are on disk and won't load from tape but I HAVE downloaded the TOSEC Oric bundle and am trying to work out how to get disk images and/or TAPs back onto a floppy. I've got an old Cyrix x86 PC that I installed Win98 on today - 32 whole megabytes of RAM - and added a 1.2mb HD 5.25" floppy drive. Reading a lot of posts here I've copied over the OSDK for utilities like WriteDsk and tap2wav but there's something missing.

On the PC I can format disks to 720k by spoofing the BIOS to think the floppy drive is a 720k 3.5", that works and I can write DOS things to disk but can't make the PC do a floppy boot, not a problem I hope. I can initialise floppies on the Atmos using INIT B but the PC can't read them, nor can the Atmos read 720k disks formatted on the PC. WriteDsk just coughs after a few seconds.

Am I missing something fundamental or should I concentrate on getting tap2wav working? I NEARLY got Hunchback working last night off my laptop.

by Symoon
A piece of advice about using TAP2WAV:
- use the switches -11 (11kHz signal) and -a (adds a silence at the end)
- switch off any wifi thing on the PC that reads the WAV file
- keep your mobile phone away

Yep, I got that working 100% last night, though some games need to be in 'oric 1' mode before they'll run. Still, nice to have reliability and it means I can leave out the disk interface if I can't get it running.

Romu's page is the one I was reading which told me about writedsk originally, I think it's just my understanding of the oric disk format that's confusing me given that some posts hint I should be able to init a disk on the Atmos and read it in a PC which doesn't work. I'm going to try a few more floppy drives tonight and see if I can dig out a genuine 720k. I know there's jumpers to change for different hosts and also different drive cables change how things work. If I can get writedsk to successfully create a floppy I'll be winning.

by witchy
and I've just had a small maniacal laugh to myself when WRITEDSK successfully wrote SEDORIC3.DSK

Much playing around with jumpers and 4 different floppy drives showed the first drive I used was ok all along and it was just the BIOS setting that clinched it - it's now set to 360K 5.25". Now I have the bones of several external floppy units to put back together

If anyone wants any more info just shout. 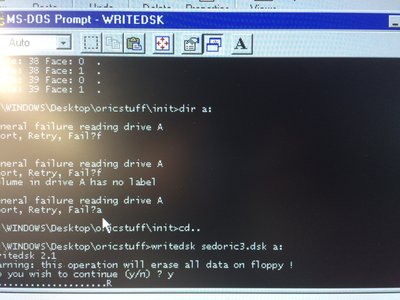 writedsk working for the first time 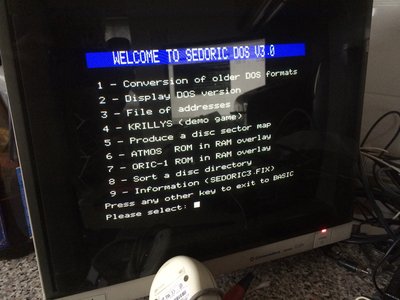 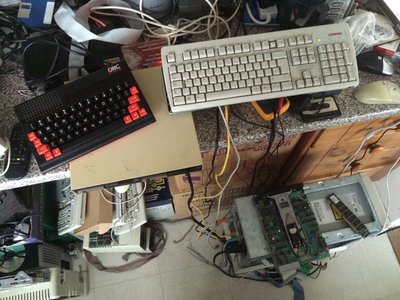 who's going to clear THIS up? Oh. Me.

by Symoon
Congratulations! Have fun

by Xeron
Hey witchy! Glad you got it working. Fun to see you on another forum.

Small world in retrocomputing... It's partially your fault that I'm here in the first place, Instead of spending ages writing disks that may not work I could test images in Oricutron beforehand, it's great to have several Orics on my imac at once

by ibisum
Welcome to defence-force witchy, great to hear of your adventures so far - would love to be kept informed of what else you get up to with your Orics! I think you do a great job of keeping the spirit alive, sir!

by witchy
Ta very much!

It always surprises me how much intermingling there is ! Obvs I've known Xeron for years and years but not in an Oric way

I've moved on from Orics to Apple][s at the mo and I'd love to think at some point I could leave work and do this sort of thing full time. Pipe dreams eh...