The Oric video chip is not an easy beast to master, so any trick or method that allows to achieve nice visual results is welcome. Don't hesitate to comment (nicely) other people tricks and pictures

... with appropriate modifications to fixed point. You can set up offset_x/y at the start of each scan line either by tracking them along each edge and doing a divide, or by plane or barycentric calculations.

For now I've managed to put the calculation under the following form:


Which is similar to what you describe because:
So it lead to the algo you've given.

The problem is that R and S are numbers like 2.6 or 3.4 (with non neglictable decimal part) that I can't just round after a division.
I have R and S under the shape Ra/Rb and Sa/Sb with Rb<Ra and Sb<Sa.


Either I do the division and work with Q8.8 fixed point values to keep precision and accuracy.

So it's hard to figure out what's more efficient.

For now I only protyped in python the formulae given at the beginning of this post (i.e I haven't integrated the iterative formulation of the texture_x/y calculation)

I use this simple texture file: 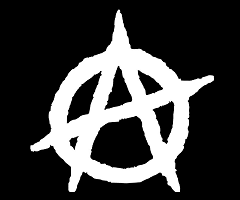 When I do a projection on a plane 3D surface (it's not real perspective fill .. it's just image stretching ) by using floating point arithmetic it gives the following result: (I draw triangles to see the shape onto which I map the image) 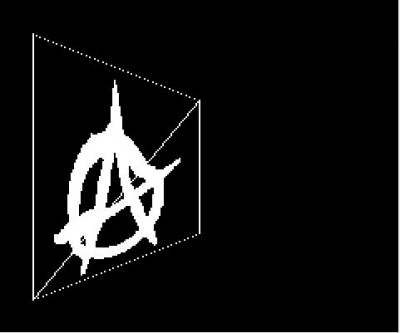 And when i use 8 bits integer calculation (with lookup tables for euclidian norm, arctan, sin and cosine), it gives: 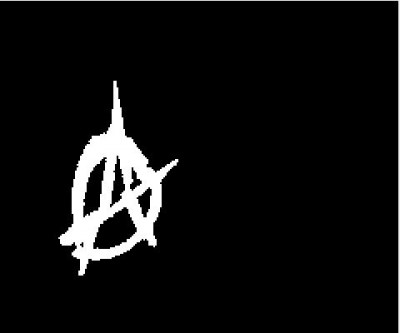 It doesn't look too dirty but last steps of calculation (the ones that compute R=Ra/Rb and S=Sa/Sb) are still done on floating point values and they are not incremental. So it might get a bit dirtier when I will deal with that.

What are plane or barycentric calculations ?
Top

It look like something is wrong with the rendering. The circle surrounding the A is not convex when projected (look at the upper right quadrant: it points inward when projected). Correct projection should preserve concavity of shapes & "straightness" of segments (look at the right side of the A-letter.. it isn't straight after projection). You should try to project a (possibly rotated) checkerboard to clearly view the perturbing geometrical aberrations this simplified projections creates.

And may be this: on the original source the image is centered, but it doesn't look centered wrt to the bounding box when projected. It looks to me a bit shifted to the left, that is closer to the viewer than it needs to be. One can further see this when comparing the space to the drawing from the left or right edge of the bounding box. They both look the same. However the right part of the projection being further away, the remaining space should look "smaller" than the space to the left. I'm not sure I explain this correctly.. but something looks weird considering the left/right space around the projected drawing and the bounding box. 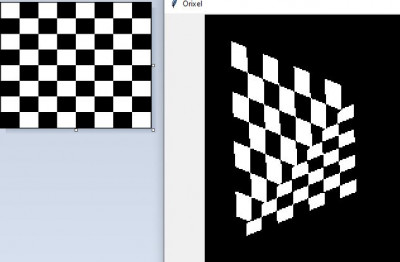 It seems the algo need a fix .. Thank you for your remark
Top

No, it's not perspective correct — it's an affine rendering. So exactly what you'd see on an original Playstation. As per discussion above, the problem is that texture (x, y) aren't linear in screen space; (x/z, y/z, 1/z) are but then you need at least one divide per pixel to get back to regular (x, y).

Old DOS titles tend to divide only every e.g. 16 pixels, and then linearly interpolate in between. That's very obvious in Descent, slightly less so in Quake. Later, more enlightened Playstation titles subdivide entire polygons. Subdivision was Sony's answer to just about everything on the PS1, including clipping, so there was direct library support for that.

Alternatively, go the Wolfenstein/Doom way and avoid divides entirely by just drawing walls in vertical strips and floors in horizontal. In both cases you're stepping along a line where z is constant. So, again, no divides. As long as you do the work at the edges correctly.
Top

Basically, in the specific case of a labyrinth where the walls are always vertical, there are plenty of optimizations that can be done which solve the specific issue you have (which would not work at all in something like a 6DOF* game like Descent), and if you choose to have the eyes (camera) at the center of the walls, you just need to rasterize one slope (top or bottom), which gives you the other one by symetry, and also the total height of the vertical segment, and you can use a precomputed table of vertical increments to move in your source texture