I tested my Telestrats today (2 different ones), none is working anymore.
All I get with HYPER Basic and Telematic ROMs is this, for both: 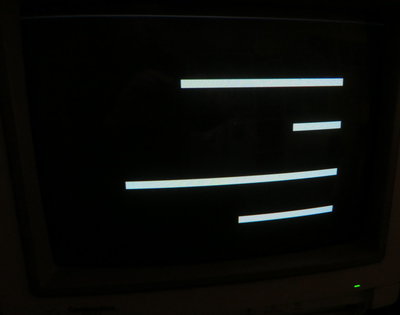 No reaction from the drive. Each Telestrat has its own set of ROMs.
Both were working 12 years ago, one was even tested and fixed by NightBird.

Any idea anyone? Could it be a power problem?
Thanks!
Top

Damnit, I just tested my Telestrat too. And alas, it is also non-functioning.

So consider me following this thread very closely along with you.

Ouch, what happens with yours? Same pitcure than above, or something else? (if anything!)
Top

Just junk on the screen - nothing like yours. Doesn't matter what I do, I can't get as clean a picture as your...

I'm going to try another power supply in the next few days, and I'll follow up - hopefully we can both get our Telestrats back in working order ..
Top

I'll sadly be away from my Telestrats for a few weeks. Actually I can't use them much, they're stored far from my main living/working place. That's why it took me a while to have an opportunity to plug them again

Beware that the SCART cable for Telestrat is different from the Oric-1/Atmos one. This is very important, I was told you could fry your Telestrat using the wrong cable.
Does your drive seem to work?
Top

SCART: oh shit, this may be the issue. I tried using the SCART cable that was in my Atmos, which is the one built by RetroComputing and has been quite reliable in the past. I hope I didn't fry my Telestrat, damnit. (Haven't tried the drive..)

But, I will need a few days to return to debugging this, as I'm now away from my collection. Have you got any references for me on the differences between SCART for Atmos and Telestrat?
Top

ibisum wrote: ↑
Wed May 01, 2019 8:43 pm
Have you got any references for me on the differences between SCART for Atmos and Telestrat?

It's in French but André is a reliable source.
Top

It looks similar to the Atmos/ Oric-1 boot screens that you get prior to he main screen. Typical failure to boot. Could be all sorts of things.
I'm not sure what sort of RAM is in the Telestrat but the other Orics are well known for faulty RAM.

Electronic equipment needs to be used to keep it working. If it's just sitting , it can fail. Keep your Orics running to keep them healthy !
Top

One of my Telestrats and two power supplies were heavily tested by Nightbird yesterday.
Verdict: it's the Hyper-Basic ROM that is damaged. That means all the ones I tested were damaged.

So, apparently, Telestrat cartridges don't age well. Nightbird tells me they can get erased with time.
What I don't know, is if a more frequent use f them would keep them alive longer, or would have no effect on their death?
Top

My opinion is that the frequently usage doesn't help to keep data intact in UV-EPROMs.
There is no such analogy with the "refresh" cycle in DRAM chips.

Additionally there is no clearly stated info how long is the data retention time of these chips - different sources claim 10-20-40 years (and even >200 years but for EEPROM's). For me it depends on thing like: is the "window" well covered with nontransparent sticker, is the chip inside of a box or it's on direct light exposure (sun or indoor fluorescent light).
Interesting fact is that spikes in power supply can also lead to random bit "switching".

Thanks ISS. In my newbie mind, I thought electronic chips would last forever

Also UV-EPROMS (the ones with windows on) have varying voltage requirements. Not all programmers meet the spec and so the chip may not be fully programmed, which can lead to early failure. The data stored isn't digital/binary after all, but a level of analogue charge. It's only rendered binary by a comparator that reads out 0 or 1.

Example: Some chips require the main voltage rail to be raised to 5.3v on programming (as well as providing a 12/12.5v VPP voltage). To be really sure, the EPROM should be verified back at 5.3v and again at 4.8v, to ensure correct readback under all voltage conditions.

Example: Some programmers use "smart algorithms" to save time, instead of a 50ms programming pulse for every location, they use incremental 1ms pulses (on one location), reading back the data, until it sticks, then program once more at e.g. 50% of the cumulative pulse so far. It's faster, but is it reliable? No-one will know until 30 years from now

UVEPROMS can fade, which is why it's important to dump out any data in them, and preserve it elsewhere.
Top

mikeb wrote: ↑
Sun Jun 16, 2019 7:38 pm
Also UV-EPROMS (the ones with windows on) have varying voltage requirements. Not all programmers meet the spec and so the chip may not be fully programmed, which can lead to early failure. The data stored isn't digital/binary after all, but a level of analogue charge. It's only rendered binary by a comparator that reads out 0 or 1.
[snip]
UVEPROMS can fade, which is why it's important to dump out any data in them, and preserve it elsewhere.

Yup, whenever you obtain a cartridge, one should immediately dump it properly for preservation: Dumping the ROM is essential but in order to easily compare it to other versions and catalog it, content hashes are very useful.

If you had the rare v1.x version of a game and the UVPROM eventually loses its content you would not want to replace it with the v1.0 version of that game.

@byuu, who writes the Higan and Bsnes emulators, has exposed all the signatures of his dumps on his website, this is quite a useful reference: https://preservation.byuu.org/.
Top

iss wrote:Additionally there is no clearly stated info how long is the data retention time of these chips - different sources claim 10-20-40 years (and even >200 years but for EEPROM's).

Most accurate estimate: "decades". I have some datasheets for UV EPROMs that state 10-year data retention. I think that's rather short. More likely to cover manufacturer's ass in case EPROM looses its data even sooner. I have some Flash EPROM datasheet that states "Greater than 100 years Data Retention". While it's doubtful an EPROM in plastic housing (the device itself) would remain in working order that long. Let alone its contents. More so since the underlying technology is similar to that of UV EPROMs.

And there are many factors involved. Temperature (and -variations), storage conditions, how often it's powered up, programming algorithm used, technology node (size of the smallest structures), type of window cover used for UV EPROMs, etc etc. I don't remember seeing a <20 year old EPROM loose its data while otherwise being in working order. Likewise, the few EPROMs I've seen where bits had fallen over were nearing 30 years or older.

I suspect manufacturers themselves don't really know. Nor am I aware of any scientific research concerning EPROMs losing their data in the field (as opposed to accelerated life testing which may give a good indication, but no more than that). Expect 20 year minimum for a properly programmed device. In any case: much much longer than commercial lifespan of equipment it's used in. Might be interesting how this goes in the years ahead, as in-circuit programmable stuff (uC's etc) is in 'everything' these days. Even dumb gear like say, flashlights. And EPROMs in machines like the Oric & many others from the early 80's are >30 years age now. So I suspect "EPROM lost its contents" to become an increasingly common cause of failure in the years ahead. Well that and electrolytic capacitors...

That only helps for owners who can diagnose & fix the problem themselves. For most owners who: In all the above cases, EPROM lost its contents means: device = bricked. Or at best, looses functionality. That only an EPROM failed, helps nothing when its owner doesn't know whether it's ROM, RAM, CPU, ULA, video circuit, crack in a pcb track, or power supply. Or how to fix.


NekoNoNiaow wrote:Yup, whenever you obtain a cartridge, one should immediately dump it properly for preservation:

Depends. Mask ROMs are extremely reliable especially if they spend 99% of the time sitting in a box. Usually surviving much longer than the hdd's, USB sticks etc that people store their ROM dumps on. Yeah I know... backups, off-site copies, upload to some online archive...

If it's an EPROM, then it depends on age & rarity. No existing dump: yes PLEASE, dump ASAP! If it's a common title, and your dump comes from an EPROM that was programmed 28 years ago, who's to say any differences from existing dump is in fact another version. Might as well be some corrupted bits.

Which is one reason I'm very careful with my personal archive of system ROMs (and to a lesser degree, game ROMs). Not so much because they're hard to find, but because I personally dumped them back in the day when all those ROMs and EPROMs were still 'fresh'. And kept multiple checksums for those dumps over all those years. Bring in a dump for a machine that I already have in my dumps, and (unless proven otherwise) I'll assume my existing copy to be more trustworthy than the new one. Or in the case of say, a Sinclair ZX81 or ZX Spectrum, I have 5+ actual machines to check against. Not some online hash database (though I understand & respect the purpose of databases like TOSEC & co).
Top

The same applies for OTP (One Time Programmable) chips where you program them, once, by blowing fuses away. Also binary/digital: The fuse is either there or not. Pretty reliable.


I personally dumped them back in the day when all those ROMs and EPROMs were still 'fresh'.

One of the first jobs after getting (building) an EPROM programmer was to read back anything known to have an EPROM (or mask ROM) in it. Data preservation and curiousity!
Top
Post Reply
33 posts