This is the right place to discuss on how to implement hardware vsync, adding a VIA or AY chipset, puting multiple roms, or how to design a new flash expansion card.
Post Reply
14 posts • Page 1 of 1

I'm new here. Recently I repaired an Oric Atmos that basically sat in a box for many years. Bought it once as "working", which turned out to be not the case, and since I didn't have spare parts like CPU, VIA, ULA etc it got boxed up. Years later I acquired some parts but was busy with other things. So parts got stored, and well... as usual 'life got in the way'.

Never used an Oric machine back in the day, so I have no experience using or programming it. Not familiar with 6502 assembly either.

Anyway, I'm no stranger to hardware (quite the contrary!). So recently decided to have a go at repairing this nice machine. I succeeded in doing so, and did some modifications in the process. Most significantly: About that last part: searching the internet turned up a few forum threads & webpages, mostly describing how weak the signal is that goes into the UHF modulator. Suggesting one might need a video bandwidth opamp or the like. So I had a good look at the Oric's schematic, and designed a simple transistor-based mod which worked on the 1st try.

Which brings me to my question: is adding a composite video output to the Oric considered a "solved problem" ? Or are people still struggling with that / only unsatisfactory solutions are known?
Top

Most people don’t bother with composite as far as I know or have seen, as Orics output a nice clean RGB signal that works really well with a TV that can take a RGB/AV input.
Bazinga!
Top

Yes I use the RGB output too. But I prefer to have options. Not every TV/monitor takes analog RGB at the horizontal sync frequencies used by home computers like the Oric.

And hey the UHF can (read: its RCA connector

) is there, why not use it? UHF is worthless anyway these days. Never mind that the modulator in my Oric was near-dead already & RF modulators are not on the list of things I bother to fix/replace.
Top

I'd say that all of us use RGB to SCART, but if you have a nice mod to use composite, it would be great if you shared with us

RetroTechie wrote: ↑
Sat Jun 01, 2019 6:10 pm
Which brings me to my question: is adding a composite video output to the Oric considered a "solved problem" ? Or are people still struggling with that / only unsatisfactory solutions are known?

Composite as a solved problem, definitely not.

When I was still living in France, before the days of cheap scan-doublers we had problems getting the Oric RGB output to be accepted by video projectors used in lan/demo parties, so I tried a few of the composite mods we had, and the results were not pretty: Yes we had a picture, but basically the BLUE was so dark that it was impossible to distinguish from BLACK, and YELLOW was some kind of ugly dirty mustard stain, etc...

That being said, the display on the project was stable and undistorted.

Now, fast forward to 2019, you either have a modern flat panel screen or a color tv, and there's a high probability you will get a better picture with the SCART output than with composite.

That being said, if you have one of these reluctant screens that refuse to display the SCART output of the Oric (I had one), then the composite mod can help, but I see that as an alternative in case of issues: Don't hesitate to share it!
Top 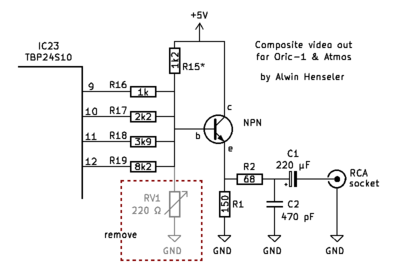 R16..R19 are on the Oric mainboard (no changes there), R15 is replaced by this mod. RV1 is removed, the other components are added. RCA socket is the one from the RF can.

About the weak composite signal going into the RF modulator: looking at the Oric's schematic, one can see that R16..R19 in the 'D/A converter' are much higher values than the resistor divider formed by R15 (originally 62 Ohm) and RV1 (220 Ohm). This means that the digital outputs from the PROM (IC23) have a relatively small effect on the voltage on R15/RV1 point. Hence the trouble people have had trying to use this as a video signal directly. Transistor-buffered or otherwise.

BUT: since IC23 has TTL-level outputs, voltage swing on those outputs is much larger (probably from around 0.4V to 3.5V or so).

Which made me realize a simple solution: mess a bit with the 'load' on the right side of R16..19 network. I did this by changing R15 to a much higher value, removing RV1, and putting result into an emitter-follower to amplify the output current (not the voltage!).

R15 isn't critical. I started with 1.8 kOhm, but found that colors were a bit more saturated with a lower value. Much lower & the voltage swing will be reduced. Much higher and DC bias for the transistor's base may become a problem when the PROM's outputs pull it towards 0V.
Transistor itself is an ordinary small-signal NPN type (just be sure to check it has a decent gain/bandwidth). I planned to use a BC550 but found I was out. Thus picked a BC546B instead. There are many types that will do the job.
R1 is a bit of a compromise. A lower value increases the drive power for down-going parts of the output signal, but increases power consumption of the circuit. 150 Ohm is a reasonable (and often used) value for this purpose.
R2 serves to match output impedance of the circuit to the coax cable. A bit less than 75 Ohms is needed. I re-used R15 (62 Ohm), not quite optimal but does the job.
C1: within reason, basically the bigger the better (I used 470 uF actually). Check polarity: + goes to transistor side, - goes to the RCA center pin. There's only some 2V over it, so eg. a 10V rated capacitor is fine. Strictly speaking it can be left out, but that puts a DC bias on the outgoing signal, which isn't how it should be.
C2 is optional. It serves to smooth the edges of the signal before it goes into the cable, which usually improves image quality slightly. Too high a value, and characters become a blur. Instead of C2 one could also put a much smaller capacitor (around 22..47 pF or so) between GND and the transistor's base. While drawing above schematic I found my mod actually has R2 and C1 swapped. This shouldn't make much difference I think (if at all).

Be sure to check where signals go on the board, and what happens around the RF can! I isolated both 5V and video signal going in, and inside disconnected whatever was on the RCA center pin. Then routed that pin to the mod circuit as shown in schematic. This also takes RF modulator's power consumption out of the picture. If you're feeling adventurous, you may try & obtain both composite and RF output.

Where you put the extra components is up to you. Possibly they can fit in the RF can. I thought it was too tight a squeeze (and didn't feel like ripping the RF can's contents out), so placed the parts where RV1 used to sit.

P.S. Image quality is useable but far from perfect! Screen is stable, characters readable, colors are there, and that's about it (I tried with 3 TV's so far, all produced a stable image). Colors look washed out compared to RGB output. And depending on color combinations, plenty of dot crawl to go around...

Very cool mod, congrats!
And of course very nice and useful explanations of the schematics.
Just for reference another approach in the old posts.

Thank you for all the info ! Very useful !
But nothing about a good converter from the 74LS365, RGB+Sync Outputs to Composite video, ignoring the UHF part ?
I'm looking at this problem...

@Voyageur: Take look here for good RGB - Composite/S-Video converter. I'm using the same schematics in OricExos and it works just fine. One improvement only is recommended - use potentiometers as voltage dividers at R,G,B inputs to set properly the input signal amplitude in range 0V ... 0.714V (as per AD724 datasheet).
Top

Many thanks, Iss.
I will try it or a similar one.

Yes if you want better quality RGB -> composite video then AD724 or similar IC is the way to go. I just wanted a cheap / easy 'fall-back' option that used hardware already in the Oric as much as possible.

As I understand the Oric schematic, its composite generation is some interplay between the ULA's RGB output (only on/off per R/G/B), a frequency of 2x the color burst frequency (8.86 MHz), and a 'conversion table' with 4-bit accuracy (the PROM). Since this 8.86 MHz clock is independent from the ULA/CPU clock (or dot clock), this means that in the output, some pixels may be 'cut short' while other pixels are not. As compared to a situation where dot clock generates pixels directly (like for the RGB out) or otherwise synchronized with the dot clock. Not to mention the uncertain voltage levels from the ROM's outputs, difference between low->high and high->low transitions, or that resistors in the 'D/A converter' are very rough values.

Obviously these inaccuracies & mismatches add up to degrade the output signal. Which for composite video, isn't super to begin with.

Meanwhile I re-worked the DC input. Now has a switching 7805 replacement, polarity protection, and - of the DC connector sits on circuit GND. No problem running it on up to 24V or so input. Guess I have one of the most heavily modded Oric's in the NL by now (if not thé

). Also soldered a tape cable, and got the ".tap -> .wav -> Oric's tape input" path to work. Both using smartphone or PC to play the .wav's. Internet-sourced, tape cable transferred software for the win!

The "conversion table" has small snippets of a sine-wave (very rough) in it, indexed by the two-bit counter from IC24, and also depending on the 3-bit value of colour (from 0 0 0=black to 1 1 1=white) produces the same 4.43MHz sine wave, but shifted by a varying phase-angle.

This 4.43MHz signal is the "colour carrier" that is superimposed on a black and white (greyscale) signal to tell a colour TV there is colour information to decode, and the angle of the sine wave (relative to a known starting "burst" just before each scan line) denotes the colour.

The starting burst, and other timing related changes (turning off the carrier when not needed) are the other 3 bits, from monostables IC26/27, derived from the composite sync signal

The output goes into the 4-bit DAC to create a sine-wave (ish) signal.

It is all a bit cheap, but it works!
Top

I got my Atmos this January 2020 as an early b-day present.

Even though I have an SCART-TO-HDMI converter that works with RGBS SCART inputs, I like the idea of having alternatives.
So, first thing upon its arrival, I disassembled the Atmos and sanity-checked everything inside: no shorts, good power, regulator working, etc.

I, then, proceeded to remove the modulator can and... dismantled it, component by component. Complete. Did not look back since.
I got the base, the can with the RCA, the top lid and the bare PCB. Used some of the removed components in it to make RetroTechie's mod in that same PCB and proceeded to reassemble it and put it back where it was.

It friggin' works beatifully. Now I have Composite + RGBS outputs, and the machine's guts look original.