This is the right place to discuss on how to implement hardware vsync, adding a VIA or AY chipset, puting multiple roms, or how to design a new flash expansion card.
Post Reply
5 posts • Page 1 of 1

Some Oric not working with Cumulus, here is small circut for mod Bus board what can help .

This circut improve O2 signal from CPU to Cumulus.

I hope this help. Also soon i recive fixed PCB for busboards so if somebody need one let me know. 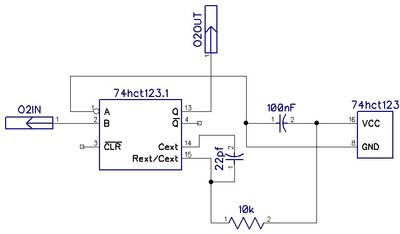 Your improved bus board is compatible with the original Cumulus built by Retromaster and Metadata?
Top

I build some cumulus few months ago too and i build next few soon . Yes, orginal busboard for Cumulus like this, is modded 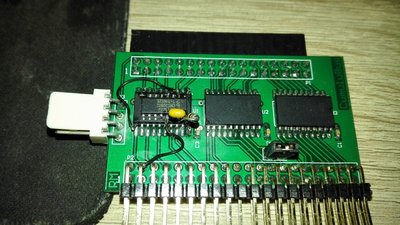 Cool! I haven't run into this issue with any of my Atmos's yet, but its good to know you fixed this!
Top

It may hide the problem for some people, or create new for other.

Try and see but I can't promise that it will really fix for everyone.

The real problem is in the CPLD, the code do a lot of things wrong, and we can't update the existing one in the field (nor I would recommend to be honest).

After looking at the signal on an oric that "fail" the signal that arrive on the cumulus is clean, there is no weird issue there, but the signal is slightly temporarily shifted from another oric that works, the CPLD code handling Phi2 is doing something, if not wrong, terribly incorrect and can't cope well if Phi2 is not in the window that this code expect.

If you remember on the Microdisc, there is a potentiometer to set the Phi2 shift internally. That is because not all oric have the exact same timing on Phi2, there is a general setting that work for most, but some are problematic and we need to trim that potentiometer. The current cumulus CPLD does not permit that.

Edit2: your change is basically adding some delay to the Phi2 signal,and is somewhat similar to what the Microdisc is doing. Don't set a fixed value to the resistor, but use a potentiometer to be able to adjust the timing or your change will fail on some oric that were working before if your change put Phi2 out of the window that the cumulus is expecting.
My Projects: Replic'Oric Project - StratoCumulus Project
Top
Post Reply
5 posts • Page 1 of 1