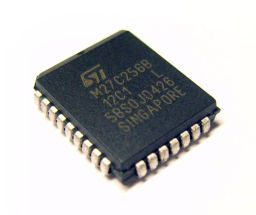 by mikeb
Sounds like a cool project, but also -- I wonder if erasing these chips can be "optimized" using that technique, like the reverse of the programming strategy I mentioned:

Your point on OTP EPROMS is noted (a UVEPROM in plastic clothing), I was indeed talking about PROMS when I mentioned fuse-blowing.

by Symoon
Just for the record, I have tested all my Hyper-Basic cartridges. Six of them: all are dead

So I wonder: am I the only one experiencing heavy problems with original cartridges right now?

by Chema
That is indeed bad luck, Symoon. When was the last time you tested them? Maybe they reached the end of their probable lifetime in the last, say, 5 years...

by mikeb
Yes, well, obviously the dog is going to come off worse for that encounter ... ever trod on a DIP IC? Barefoot? I can't see the dog enjoying it on the way in. On the way out will be worse ...

The 'harder' type of antistatic foam just gets brittle & tends to crumble over time (+ repeated insertion/removal of IC's).

Try lighter fluid. It cleans a lot of stuff like this.

by Dbug
You can add WD40 to the list of things that can dissolve this type of crap, I used that to clean the Yamaha Tape drive that had melted belts remnants all over the pulleys and gears

by Steve M
Lighter fluid is similar to white spirit, both being based on naptha, but with different additives. (Similar stuff to dry-cleaning fluid.)

by mikeb
Surgical spirit? Oh yes, that lives in the bathroom, not workshop/garage

If you're at the stage "and if that don't work, methylene chloride paint stripper!" you'll probably dissolve everything that's not metal.

by Steve M
Surgical spirit can be useful for softening up ink in pens. Or just thinning the ink.
The purple isn't ideal for that. I'm not sure what it is but you can get a residue left from meths.

I'm not sure what the actual difference is. I think the Americans call Meths 'denatured alcohol' and surgical spirit is 'rubbing alcohol'.

My dad was a pharmacist. We used to get people coming in to his shop with the characteristic pink eyes, asking for meths. It was pretty much the cheapest alcohol you could get then, but not in a nice way. Dad used to refuse to sell it. Back then it was restricted.
All times are UTC+01:00
Page 2 of 2