If you want to ask questions about how the machine works, peculiar details, the differences between models, here it is !
How to program the oric hardware (VIA, FDC, ...) is also welcome.
Post Reply
24 posts

A few years ago, I had a TechniMusic speech synthesizer (the MEA8000 based one, that speaks with a French accent), which unfortunately did not do any advanced address decoding, so it was pretty much impossible to use with any other hardware... like for example a Microdisc or Cumulus. 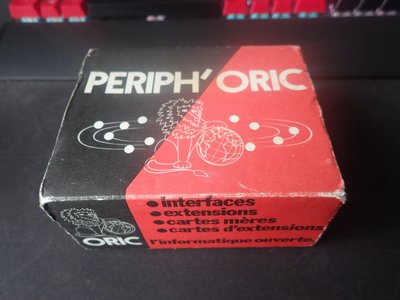 I know have a Mageco Electronics model (SPO256A-AL2 chip, speaks english), from the Periph'Oric accessory range, and that one seems to have a more advanced bus handling, with even the address changeable using some solder straps. It's setup by default to use the address 1009 (#3F1) and is recognized by a few games like at least Cobra Pinball and Frelon. 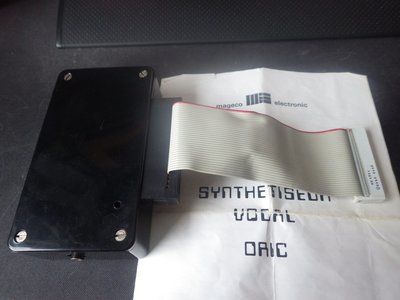 What I'm wondering is how best to get it to work with my Cumulus:
- Will that work at all?
- Should I plug it before or after the cumulubus
- Can I just add some female connectors on the flat cable and add my peripherals on it? 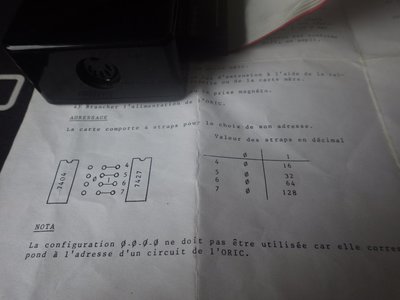 Another thing I was wondering is: Is it possible to modify the Cumulus cable/interface so it can actually be entirely disabled (like if it was not plugged at all), because I'm trying to do some videos about games on tape, and each time I have to plug and unplug it, else the Oric just does not boot. 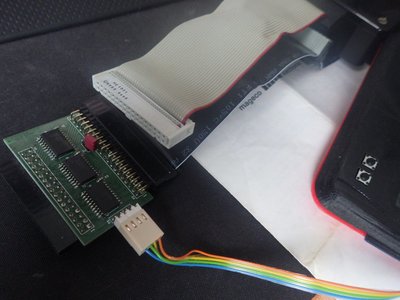 From what I see on the picture with solder straps the default is a range #3F0..#3FF.
This means it can be used with Microdisk and Cumulus (but not with Jasmin!).
The easiest way is really to use a male(!) 34-pin connect mounted directly on the cable of the synthesizer and plug Cumulus bus into it. The connector: About to disable cumulus - you need only to disconnect the thin 4-wires cable from Cumulus bus board. If Oric doesn't boot then use metal tweezers to connect shortly the two outside pins of the small connector. A button can be connected and used too instead of tweezers.

BTW, is it possible that the names of the synthesizers and the chips you mentioned are switched or not exact?
Top

SPO256 (or SP0256) is certainly a correct chip number for speech synth, that was used in the "Maplin" Speech synth (for Oric and I think Spectrum, different PCBs). The Oric version plugged into the printer port, which avoided all this trouble

What puzzles me is:

But the info HERE is:

),
because from MEA8000 data sheet it use only one address line A0: 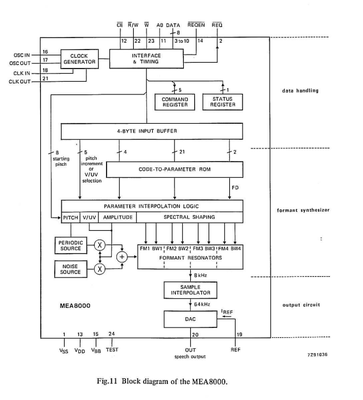 That being said, I opened both boxes, and I can confirm that my TechniMusic had a MEA8000 and spoke without a British accent.
I recorded this demo song with it some years ago: http://defence-force.org/download/clair_de_la_lune.mp3

And this Mageco, with French manual and in a French box, does have a SPO inside. Maybe they had an english speaking model early one, and then replaced by a french speaking one later?
Top

And about Cumulus I think it will be at least safe to give it a try.
Top

Annoyingly I seem to only find white or green connectors.
I want black ones to go with my black flat cable :p Mmmmmh, strange list.
synthor_gl_1.jpg is not a vocal synth model, it's me taking a picture of the TechniMusique one. "Synthor" was the name of their speech program, "gl" stand for "general look" (I didn't know the word "overview" 20 years ago

), and 1 means 1st picture.
Also, I don't get it: for me Mageco used "the English speaking" chip. So it would not be a MEA8000.
Dbug, yours is speaking English too, right?
(of course that doesn't mean a 2nd version from Mageco does not exist, but I don't think I ever saw / heared one).
Top

(wow, very good memory, Symoon! synthor_gl_1.jpg is on oric.org in description)
(and here is good old-fashion info about MEA8000, SPO256 and PFC8200 - all connected to PC printer port)
Top

Damn, if they are so easy to interface on the printer port, why the heck did they decide to built the two I had on the main expansion bus?

I see that Jede had fun with the VTR/Mageco:

Maplin's name for it was "Oric Talkback" -- also for the VIC-20 and Speccy -- The Oric one is in Maplin 1983-Dec (Issue 9). Surprise surprise, it's a Robert Penfold project

Sadly, it wasn't the printer port after all (what was I thinking of -- maybe one of the other variants which I can't lay my hands on the issue for right now!) -- it did use the Expansion port (40 pin). Sorry to get your hopes up. Although, it would be easy to interface to the printer port. (D0-D5 for writing 1 of 64 allophone values, and an input to read back the "I'm done!" line to send the next allophone).

Yes, it's "General Instruments" -- the "Texas Instruments" influence probably came from the "Speak 'n' Spell" toy, which used a TI chip, and the Texas TMS5220/TMS6100 Linear-Predictive speech synth/ROM set -- such as the one used in the ICL One Per Desk to answer the phone with messages.
Top

With the risk to go off-topic here, what you think about the last paragraph on p.11: 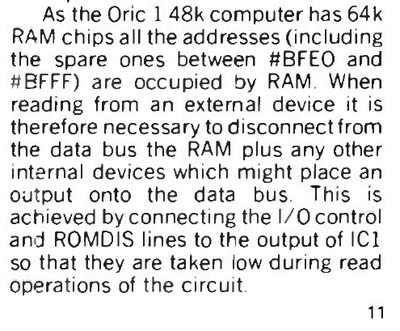 Does ULA will agree to disable RAM at #BFE0-#BFFF with only ROMDIS and I/O Control low ?!?!

I don't think that's right, but I always disliked the interaction on these signals, and having learned from bad/incomplete examples at an early age, I was always suspicious of how it should work

I/O Control low: Forces the VIA off the bus, to allow external peripherals to take over the un-decoded page 3 (0x3XX) addresses. Otherwise the VIA just fills up the whole of page 3 with mirrors of itself every 16 bytes. I don't see how that helps this project at all, up at 0xBFxx.

ROMDIS low: Forces the ROM off the bus, so reads/writes come from underlying shadow RAM in 0xC000-0xFFFF, as used by the disk systems.

Isn't it missing asserting MAP, to prevent reads coming from memory (although the speech synth is a write-device, you do need to read to work out when the allophone is complete)?

Aside: The book "Programming the Oric-1" (BP129 in the endless Babani/Penfold series of books) shows a simple input port with IO CTRL/MAP/ROMDIS bonded together and driven low. So he knew about it then

The only problem is that all this ignores the Clock (Ph2) signal, which should be included in the decoding somewhere. Otherwise, the input is presented for the whole of the 1MHz cycle (not just the CPU half), clobbering the databus when the ULA is trying to fetch data from RAM. This means that repeatedly polling an external port will eventually cause screen glitches, the worst is getting accidentally knocked into 60Hz mode ...
Top

I always found all this confusing and cumbersome too. For all the strange designs of the Oric (video mode, impossibility to disable ROM without external hardware, and so on), the VIA replicating its registers all throughout page 3, instead of using just 16 addresses (and keeping some more reserved to map the AY registers, for instance) so you need an external signal to deactivate it...

But I am not a hardware guy, so there might be reasons for all this...

I also find strange to use the free memory at bf00 (which is usable as normal RAM in the 48K models) instead of page 3. There is, IIRC, even an IO output signal in the expansion bus, which is asserted by the VIA when page 3 is accessed to aid in the decoding.

The only thing I don't understand is why you need the phi2, Mike. Wouldn't it suffice with the R/W signal, that indicates when to read and when to write?

A noob question I know...