I was intrigued by the name of this "so called" ancient metal because of its very high level of value. I thought maybe it could be used if a nice name for an hardware or software related to Oric is needed in the future.

"Orichalcum or aurichalcum /ˌɔːrɪˈkælkəm/ is a metal mentioned in several ancient writings, including the story of Atlantis in the Critias of Plato. Within the dialogue, Critias (460 – 403 BC) claims that orichalcum had been considered second only to gold in value and had been found and mined in many parts of Atlantis in ancient times, but that by Critias' own time orichalcum was known only by name.

Orichalcum may have been a noble metal such as platinum,[1] as it was supposed to be mined, or one type of bronze or brass or possibly some other metal alloy. In 2015, metal ingots were found in an ancient shipwreck in Gela (Sicily), which were made of an alloy primarily consisting of copper, zinc and small percentages of nickel, lead, and iron.[2][3]"
Top 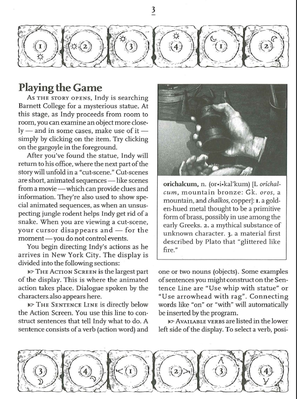 and recall about your post immediately
So, the orichalcum is already used in the game industry - Indiana Jones and the Fate of Atlantis

Attached is the whole manual.

Hmm... I played that game many times. Maybe thats why the name sounds familiar to me