by Hialmar
Just saw this at the silicium.org old computer stocks: 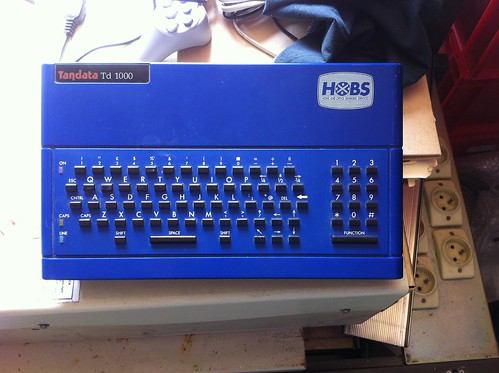 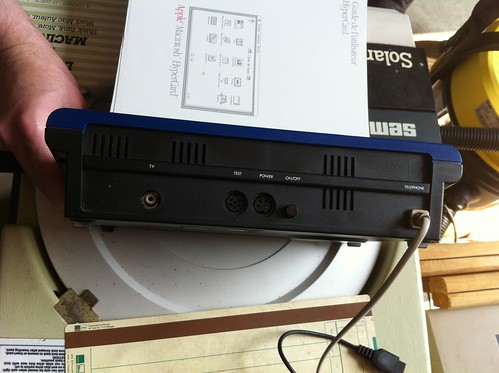 Anyone saw one of those in action in Bank of Scotland offices ?

by Antiriad2097
Sorry, but I didn't become a customer of theirs until a few years ago, so I missed these. I might have changed bank sooner if I'd known.

by ibisum
Would be great to see it boot and play something new!

by Godzil
Despite from Tandata that could be a spinoff of Tangerine, this terminal have nothing in common with Orics. Even the keyboard that some seems to tell that it is similar to the Oric1, I really don't see the point. The key disposition is absolutly not the same, nor the color or the shape.

Edit: BTW as it seems that Silicium.org have one, could you make high quality pictures of the internal? I seriously doubt that they use a "custom" cpu and that this device share anything with the Oric line of product..

by Hialmar
I'll do it the next time I go there.

by ibisum
I'd say it, at the least, shares some design cues in the case department, with the Oric-1. It looks like a 'fat Oric', anyway, even if the keyparts are different - the intent of the designer is so similar when comparing Oric-1/Td-1000, that I'd be surprised if it at least wasn't the same mechanical designer behind the case.

Would be fun to see it boot if all it took was a ROM swap!

by Steve M
Halifax merged with Bank of Scotland in 2001 which is well after Oric's time. But this is apparently Home and Office Banking, I think. My partner Ally remembers these from the eighties and says they were cutting edge for their time. You could do 'online banking' in the days before the internet was properly up and running.
I thought they had these in the bank, similar to the minitel terminals, but apparently not. She says you bought them for personal use and they weren't cheap.
http://www.computinghistory.org.uk/det/ ... el-System/

Godzil wrote:Despite from Tandata that could be a spinoff of Tangerine, this terminal have nothing in common with Orics. Even the keyboard that some seems to tell that it is similar to the Oric1, I really don't see the point. The key disposition is absolutly not the same, nor the color or the shape.

It's from the same family but not an Oric. http://oric.free.fr/STORY/chapter1.html It's interest is that the same people designed it.
It does share some features such as the Prestel compatibility with modem connection. Similar ideas which were part of the Oric.
I don't recall whether this was z80 or 6502 based. (?)

Interesting reading the above article again with the Tangerine Tiger going to HH electronics. I have an HH amp
http://www.vintageandrare.com/uploads/p ... iginal.jpg

iPhoto is still uploading high resolution pictures so wait a little to see all the details.

I cannot find the 6502 on it so it seems not very related to the Oric-1 after all.

Edit: if you want specific pictures of some chips please ask. I have the Tandata at home right now. I don't have anything to power it sadly.

by Godzil
Is anyone interested in knowing more about what is inside a Tangerine spin-off Tandata TD1616? (and find how it works) I may be able to get hands on a TD1616, and it could be fun to reverse engineering it.

BTW I see photos of some working Tandata TDxxxx devices and the font used looks really like the Oric 6x8 font.

I've also take a look at Hialmar photos of the RBOS TD1000 the 40DIL chip on the left is made by Rockwell, and despite the marking I'm pretty sure it a "re-marked" 6502 made by Rockwell.
The toshiba chip is some SRAM (2KB to be precise)
The MR9736-002 chip, I suspect it's some sort of ULA, that will like the Oric manage the screen display, maybe more it was made by GEC MARCONI / PLESSEY SEMICONDUCTORS. There is also a small chip just upper this one that have a similar marking, I suspect it was also made by Plessey.

I found this page by accident! Just to let you know that I have a related Td1100 from TANDATA and that definitely uses a 6504 as its CPU so there is a good chance the others in the range are similarly 6502 related.

by Hialmar
Thanks for the information and welcome on the forum

by Godzil
The TD1616 use a Rockwell QIP version of the 6502 with a PROM along, on a daughter board soldered in place of a 40 DIP chip.

I suspect that the ROBS version have a rockwell custom chip that embbed both the 6502 with a masked ROM.
All times are UTC+01:00
Page 1 of 1