And finally .. ... some of that French vocabulary.

Archimedes also translated The Last Warrior to English producing the English version for Your Oric. That's worth checking out. 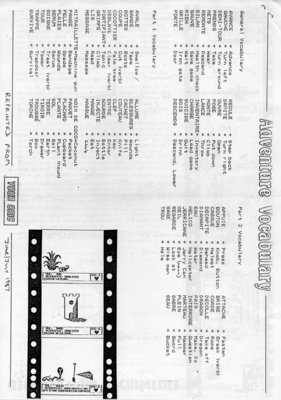 I wonder how hard it would be to really translate theses games, if they are BASIC game it would be easy, asm game a bit more difficult, but I don't think it would be that difficult.

Is there is anyone that would be interested in that?
My Projects: Replic'Oric Project - StratoCumulus Project
Top

Some are easier than others. Some need the words translating but also a bit of recoding as some recognise single-key entry; the first letter of a word.
The responses and messages also need translating and that can be problematic sometimes, with certain lengths of characters/words needed.

Adventures tend to be the games with a lot of words, so it can be very time-consuming. I tried to translate a few type-ins and found it frustrating. (But then I'm not very good with the programming and not very good at all with translation.)
Top

Well, I'm digging up an old subject, but I thought I'd let you know I may be able to help translate some French games to English, for your enjoyment

I actually had a go a few months ago at "Detective Story", a very enjoyable French game in BASIC where you play a detective carrying out a murder investigation. Although it is in BASIC and runs in TEXT mode, it features some very good background graphics and I've always found it to be very addictive and enjoyable. I used to play it a lot back then, and more than 30 years later, it still is as pleasant to play as ever!

There actually are a couple of transfer errors in the version available on Oric.org but I was able to easily fix them. Then I stumbled on this thread and I thought, well, that would be a good candidate, as it is BASIC code with no graphics screens to translate.

Eventually, I was able to translate all of it quite quickly, after getting over some minor hurdles: being based on 'dialogues' and narration, the game displays a lot of sentences, most of which are built from combining different parts of speech. To make it work, some grammar rules are built into the code. So the difficulty was to adapt these rules when translating elements to English (especially since English and French grammar rules are quite different).

Anyway, I've had the English version of the game ready for a while now, and I will shortly publish it (together with the 'debugged' French version as source code + .TAP files on GitHub, and also make an article out of this for the CEO magazine.

retroric wrote: ↑
Sat Jun 29, 2019 3:35 am
I actually had a go a few months ago at "Detective Story" (...)
There actually are a couple of transfer errors in the version available on Oric.org but I was able to easily fix them.

Why don't you ask! I got an error free (or at least undetected by the Oric checksum) version transfered from Jean B. tapes, since 2006

It must even be on one of the CEO CD-Rom (around 2008?). Just don't have time to update it all (one by one work) to Oric.org.
BTW I'm a bit disappointed faulty versions still end up on Oric.org

Oh, and do you know there exist official UK (translated) versions for many of No Man's Land games? Hope you checked if Detective Story didn't already exist

(which doesn't mean translations from the 80s were good and wouldn't deserve a better one! ).
Top

Well, I didn't ask because I wasn't aware you had other versions of tapes than the ones posted on Oric.org, but please do send me your converted .TAP version (you've got my email anyway), and I'll have a look at it to see if there are any bugs / transfer errors.

By the way, the page on Oric.org hints there was an "intro" tape for Detective Story, do you have it?

I'll also have a look at CEO archives circa 2008 as you suggest.

As to an existing UK version of the game (and more generally of No Man's Land games), I wasn't aware of it either... However, I did check on Google and on "ROM" sites and couldn't find any English version, but maybe someone else would know about it?

As to the reliability of .TAP files on Oric.org, there are quite a few faulty tapes unfortunately, and they are difficult to detect as you often have to actually get deep into the game to stumble upon the bug / transfer error. Sometimes you can be lucky and find the correct .TAP file for the game on the latest version of the Gamebase, but oftentimes unfortunately both sources contain the same faulty file...